Is Accuray Incorporated (ARAY) A Good Stock To Buy ?

Last year’s fourth quarter was a rough one for investors and many hedge funds, which were naturally unable to overcome the big dip in the broad market, as the S&P 500 fell by about 4.8% during 2018 and average hedge fund losing about 1%. The Russell 2000, composed of smaller companies, performed even worse, trailing the S&P by more than 6 percentage points, as investors fled less-known quantities for safe havens. Luckily hedge funds were shifting their holdings into large-cap stocks. The 20 most popular hedge fund stocks actually generated an average return of 37.4% in 2019 (through the end of November) and outperformed the S&P 500 ETF by 9.9 percentage points. We are done processing the latest 13F filings and in this article we will study how hedge fund sentiment towards Accuray Incorporated (NASDAQ:ARAY) changed during the first quarter.

Is Accuray Incorporated (NASDAQ:ARAY) a buy here? Investors who are in the know are betting on the stock. The number of bullish hedge fund bets improved by 1 recently. Our calculations also showed that ARAY isn’t among the 30 most popular stocks among hedge funds (click for Q3 rankings and see the video below for Q2 rankings). ARAY was in 18 hedge funds’ portfolios at the end of September. There were 17 hedge funds in our database with ARAY positions at the end of the previous quarter.

Unlike the largest US hedge funds that are convinced Dow will soar past 40,000 or the world’s most bearish hedge fund that’s more convinced than ever that a crash is coming, our long-short investment strategy doesn’t rely on bull or bear markets to deliver double digit returns. We only rely on the best performing hedge funds‘ buy/sell signals. We’re going to take a look at the key hedge fund action encompassing Accuray Incorporated (NASDAQ:ARAY).

At the end of the third quarter, a total of 18 of the hedge funds tracked by Insider Monkey held long positions in this stock, a change of 6% from the previous quarter. On the other hand, there were a total of 17 hedge funds with a bullish position in ARAY a year ago. With hedge funds’ capital changing hands, there exists a select group of noteworthy hedge fund managers who were boosting their stakes substantially (or already accumulated large positions). 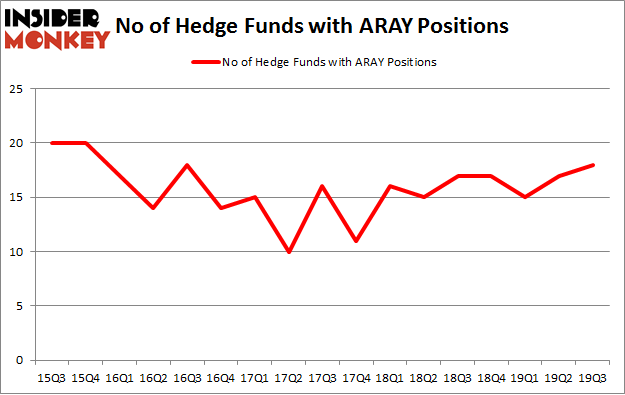 More specifically, Renaissance Technologies was the largest shareholder of Accuray Incorporated (NASDAQ:ARAY), with a stake worth $13.5 million reported as of the end of September. Trailing Renaissance Technologies was Archon Capital Management, which amassed a stake valued at $11.8 million. D E Shaw, Royce & Associates, and Marshall Wace were also very fond of the stock, becoming one of the largest hedge fund holders of the company. In terms of the portfolio weights assigned to each position Archon Capital Management allocated the biggest weight to Accuray Incorporated (NASDAQ:ARAY), around 2.79% of its 13F portfolio. DAFNA Capital Management is also relatively very bullish on the stock, setting aside 0.7 percent of its 13F equity portfolio to ARAY.

With a general bullishness amongst the heavyweights, some big names were leading the bulls’ herd. HighVista Strategies, managed by Andre F. Perold, assembled the biggest position in Accuray Incorporated (NASDAQ:ARAY). HighVista Strategies had $0.1 million invested in the company at the end of the quarter. Roger Ibbotson’s Zebra Capital Management also made a $0 million investment in the stock during the quarter.

Let’s now take a look at hedge fund activity in other stocks – not necessarily in the same industry as Accuray Incorporated (NASDAQ:ARAY) but similarly valued. We will take a look at ACNB Corporation (NASDAQ:ACNB), FVCBankcorp, Inc. (NASDAQ:FVCB), Xinyuan Real Estate Co., Ltd. (NYSE:XIN), and Molecular Templates, Inc. (NASDAQ:MTEM). This group of stocks’ market values are similar to ARAY’s market value.

As you can see these stocks had an average of 5 hedge funds with bullish positions and the average amount invested in these stocks was $16 million. That figure was $49 million in ARAY’s case. Molecular Templates, Inc. (NASDAQ:MTEM) is the most popular stock in this table. On the other hand ACNB Corporation (NASDAQ:ACNB) is the least popular one with only 1 bullish hedge fund positions. Compared to these stocks Accuray Incorporated (NASDAQ:ARAY) is more popular among hedge funds. Our calculations showed that top 20 most popular stocks among hedge funds returned 37.4% in 2019 through the end of November and outperformed the S&P 500 ETF (SPY) by 9.9 percentage points. Hedge funds were also right about betting on ARAY as the stock returned 11.2% during the first two months of Q4 and outperformed the market by an even larger margin. Hedge funds were clearly right about piling into this stock relative to other stocks with similar market capitalizations.