Abercrombie & Fitch Co. (NYSE:ANF) shares haven’t seen a lot of action during the third quarter. Overall, hedge fund sentiment was unchanged. The stock was in 20 hedge funds’ portfolios at the end of September. At the end of this article we will also compare ANF to other stocks including AxoGen, Inc. (NASDAQ:AXGN), Ferroglobe PLC (NASDAQ:GSM), and ImmunoGen, Inc. (NASDAQ:IMGN) to get a better sense of its popularity.

What have hedge funds been doing with Abercrombie & Fitch Co. (NYSE:ANF)?

Heading into the fourth quarter of 2018, a total of 20 of the hedge funds tracked by Insider Monkey were bullish on this stock, representing no change from one quarter earlier. On the other hand, there were a total of 20 hedge funds with a bullish position in ANF at the beginning of this year. With hedge funds’ capital changing hands, there exists a few noteworthy hedge fund managers who were upping their stakes substantially (or already accumulated large positions). 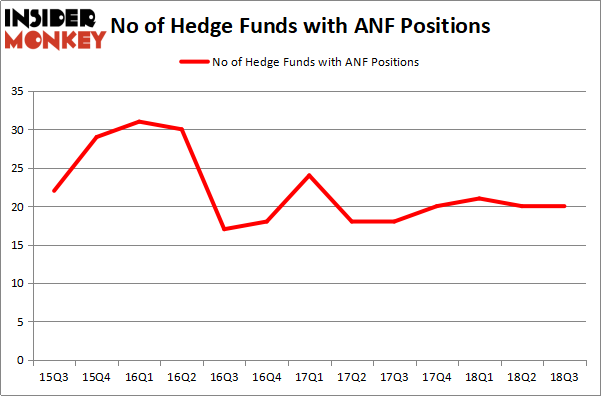 According to Insider Monkey’s hedge fund database, Renaissance Technologies, managed by Jim Simons, holds the most valuable position in Abercrombie & Fitch Co. (NYSE:ANF). Renaissance Technologies has a $52 million position in the stock, comprising 0.1% of its 13F portfolio. Sitting at the No. 2 spot is Arrowstreet Capital, led by Peter Rathjens, Bruce Clarke and John Campbell, holding a $28.7 million position; 0.1% of its 13F portfolio is allocated to the company. Some other members of the smart money that hold long positions consist of John Tompkins’s Tyvor Capital, Noam Gottesman’s GLG Partners and Robert Bishop’s Impala Asset Management.

Due to the fact that Abercrombie & Fitch Co. (NYSE:ANF) has witnessed declining sentiment from the smart money, logic holds that there lies a certain “tier” of funds who were dropping their positions entirely last quarter. At the top of the heap, Joel Greenblatt’s Gotham Asset Management said goodbye to the largest stake of the 700 funds tracked by Insider Monkey, comprising close to $6.6 million in stock, and David Costen Haley’s HBK Investments was right behind this move, as the fund dumped about $3.6 million worth. These bearish behaviors are important to note, as total hedge fund interest stayed the same (this is a bearish signal in our experience).

As you can see these stocks had an average of 17 hedge funds with bullish positions and the average amount invested in these stocks was $158 million. That figure was $168 million in ANF’s case. AxoGen, Inc. (NASDAQ:AXGN) is the most popular stock in this table. On the other hand Sibanye Gold Ltd (NYSE:SBGL) is the least popular one with only 12 bullish hedge fund positions. Abercrombie & Fitch Co. (NYSE:ANF) is not the most popular stock in this group but hedge fund interest is still above average. This is a slightly positive signal but we’d rather spend our time researching stocks that hedge funds are piling on. In this regard AXGN might be a better candidate to consider a long position.