ABB Ltd (NYSE:ABB) was in 15 hedge funds’ portfolios at the end of March. ABB has seen an increase in hedge fund interest recently. There were 13 hedge funds in our database with ABB holdings at the end of the previous quarter. Our calculations also showed that ABB isn’t among the 30 most popular stocks among hedge funds. 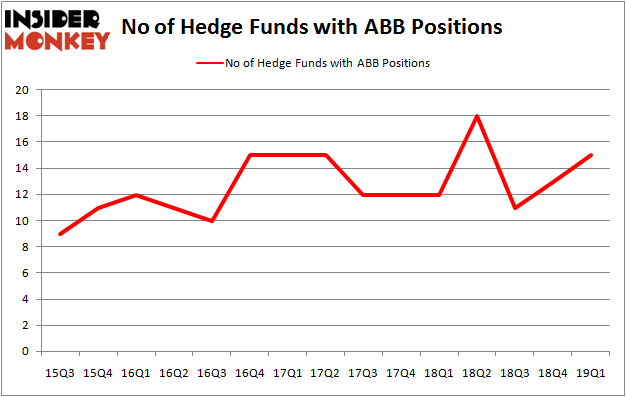 When looking at the institutional investors followed by Insider Monkey, Ken Fisher’s Fisher Asset Management has the number one position in ABB Ltd (NYSE:ABB), worth close to $212.8 million, amounting to 0.3% of its total 13F portfolio. On Fisher Asset Management’s heels is Jim Simons of Renaissance Technologies, with a $65.1 million position; the fund has 0.1% of its 13F portfolio invested in the stock. Remaining professional money managers with similar optimism consist of Israel Englander’s Millennium Management, Ken Griffin’s Citadel Investment Group and Kenneth Squire’s 13D Management.

As industrywide interest jumped, some big names have jumped into ABB Ltd (NYSE:ABB) headfirst. Millennium Management, managed by Israel Englander, created the most valuable position in ABB Ltd (NYSE:ABB). Millennium Management had $29.5 million invested in the company at the end of the quarter. Louis Bacon’s Moore Global Investments also initiated a $1.9 million position during the quarter. The other funds with new positions in the stock are John Overdeck and David Siegel’s Two Sigma Advisors, David Costen Haley’s HBK Investments, and Murray Stahl’s Horizon Asset Management.

As you can see these stocks had an average of 28 hedge funds with bullish positions and the average amount invested in these stocks was $3386 million. That figure was $347 million in ABB’s case. The Sherwin-Williams Company (NYSE:SHW) is the most popular stock in this table. On the other hand BCE Inc. (NYSE:BCE) is the least popular one with only 16 bullish hedge fund positions. Compared to these stocks ABB Ltd (NYSE:ABB) is even less popular than BCE. Hedge funds clearly dropped the ball on ABB as the stock delivered strong returns, though hedge funds’ consensus picks still generated respectable returns. Our calculations showed that top 20 most popular stocks among hedge funds returned 6.2% in Q2 through June 19th and outperformed the S&P 500 ETF (SPY) by nearly 3 percentage points. A small number of hedge funds were also right about betting on ABB as the stock returned 6.6% during the same period and outperformed the market by an even larger margin.