In investing, the greatest advantage an investor can have is a long-term investment horizon. Warren Buffett once said, “The stock market is designed to transfer money from the active to the patient.”

Therefore, true long-term investors, who are dedicated to holding stocks for decades, not months, should consider visionary companies that will shape the future of humankind. In this article, I’ll discuss three cutting edge companies that are revolutionizing their respective fields – iRobot Corporation (NASDAQ:IRBT), Intuitive Surgical, Inc. (NASDAQ:ISRG) and Tesla Motors Inc (NASDAQ:TSLA) – and how investors can benefit from their growth.

Rise of the robots!

Most people know iRobot Corporation (NASDAQ:IRBT) for its autonomous Roomba vacuum cleaner. Yet fewer people realize that iRobot produced military robots for U.S. forces in Iraq and Afghanistan, which generated 40% of the company’s 2011 revenue. iRobot Corporation (NASDAQ:IRBT)’s military robots are used for bomb sweeps and tactical operations, and were most recently used domestically during the Boston Marathon bombings manhunt. 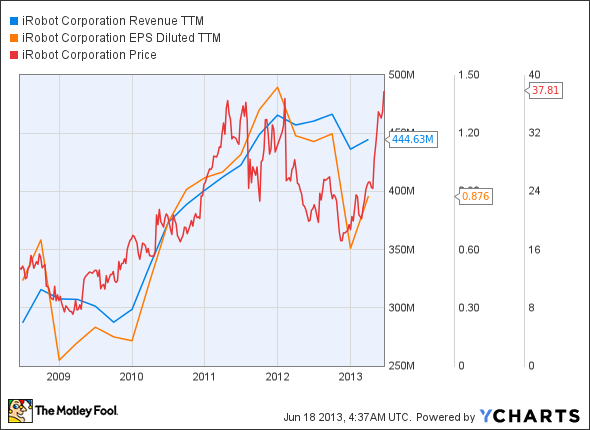 After President Obama started to reduce the U.S. military presence in the Middle East, iRobot Corporation (NASDAQ:IRBT)’s revenue from defense contracts plunged 57% year-on-year in 2012 and another 30% in 2013. Yet iRobot CEO Colin Angle was able to quickly turn lemons into lemonade by investing the company’s defense contract profit into peacetime robotics.

Angle invested heavily on the marketing and global expansion of the Roomba, which was initially released in 2002. As a result, the Roomba was transformed from a niche product into a mainstream one, and is now equipped with cutting-edge features such as room-by-room navigation, cleaning scheduling, and a HEPA filter. In addition, iRobot Corporation (NASDAQ:IRBT) introduced the floor-scrubbing Scooba, the pool-cleaning Mirra and the gutter-cleansing Looj to join Roomba in its consumer division. This segment now accounts for 90% of the company’s top line, a 60% increase over the previous year. This swift recovery from the loss of its defense contracts boosted the company’s gross margin to 45% in the most recent quarter.

Boosted by the renewed strength of its consumer products division, iRobot is expanding into health care. iRobot recently introduced RP-Vita, a 5-foot tall remote presence robot that can be controlled by doctors via an iPad from several miles away. The robot is based on Roomba technology, and allows doctors to communicate with patients via video chat, make diagnoses, and even use an on-board stethoscope. The robot and its technical support costs $5,000 per month, and has already been deployed to six domestic hospitals and one in Mexico.

iRobot’s strategy of moving robots into the hospital also relates to the future of Intuitive Surgical, Inc. (NASDAQ:ISRG), the creator of the da Vinci surgical robot. The robotic system allows surgeons to perform minimally invasive surgery via robot arms by making precise micro-movements of instruments that can make incisions much smaller than human hands can make. The surgeon views the procedure through a stereoscopic lens, which provides a magnified 3D view.

Although this technology is impressive, it is also very expensive, costing $2 million for a single system along with hundreds of thousands of dollars in annual maintenance fees. To date, over 2,000 units have been sold worldwide. However, the potential for stable future growth is attractive, since each unit sold becomes a consistent revenue stream of maintenance fees. 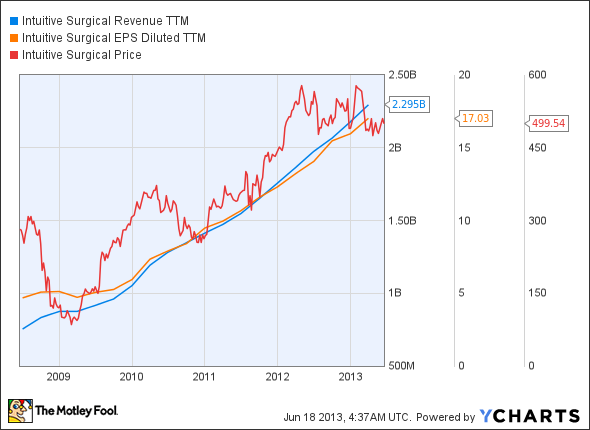 However, the value of the da Vinci system was recently questioned by the Journal of the American Medical Association, which noted that complication rates of its robotic hysterectomies was at 5.5%, compared to a 5.3% rate for traditional surgical methods. The Journal argued that based on those statistics, the benefits of the da Vinci system might not outweigh the costs. James T. Breeden, MD, the president of the American Congress of Obstetricians and Gynecologists, also made similar comments in March supporting the Journal’s opinion.