How Did Royal Gold, Inc (RGLD) Perform In Comparison to Hedge Fund Favorites in 2019?

Many investors, including Paul Tudor Jones or Stan Druckenmiller, have been saying before 2018’s Q4 market crash that the stock market is overvalued due to a low interest rate environment that leads to companies swapping their equity for debt and focusing mostly on short-term performance such as beating the quarterly earnings estimates. In the first half of 2019, most investors recovered all of their Q4 losses as sentiment shifted and optimism dominated the US China trade negotiations. Nevertheless, many of the stocks that delivered strong returns in the first half still sport strong fundamentals and their gains were more related to the general market sentiment rather than their individual performance and hedge funds kept their bullish stance. In this article we will find out how hedge fund sentiment to Royal Gold, Inc (NASDAQ:RGLD) changed recently.

Royal Gold, Inc (NASDAQ:RGLD) investors should pay attention to an increase in enthusiasm from smart money lately. RGLD was in 25 hedge funds’ portfolios at the end of September. There were 19 hedge funds in our database with RGLD positions at the end of the previous quarter. Our calculations also showed that RGLD isn’t among the 30 most popular stocks among hedge funds (click for Q3 rankings and see the video at the end of this article for Q2 rankings).

We leave no stone unturned when looking for the next great investment idea. For example Europe is set to become the world’s largest cannabis market, so we check out this European marijuana stock pitch. We read hedge fund investor letters and listen to stock pitches at hedge fund conferences. This December, we recommended Adams Energy as a one-way bet based on an under-the-radar fund manager’s investor letter and the stock is still extremely cheap despite already gaining 20 percent. Keeping this in mind let’s take a glance at the key hedge fund action encompassing Royal Gold, Inc (NASDAQ:RGLD).

What have hedge funds been doing with Royal Gold, Inc (NASDAQ:RGLD)?

At the end of the third quarter, a total of 25 of the hedge funds tracked by Insider Monkey held long positions in this stock, a change of 32% from the second quarter of 2019. Below, you can check out the change in hedge fund sentiment towards RGLD over the last 17 quarters. With hedgies’ sentiment swirling, there exists a select group of key hedge fund managers who were upping their holdings significantly (or already accumulated large positions). 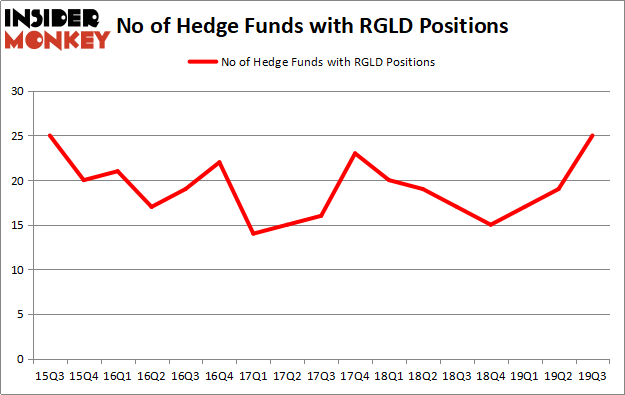 As aggregate interest increased, some big names have been driving this bullishness. D E Shaw, managed by David E. Shaw, established the most valuable call position in Royal Gold, Inc (NASDAQ:RGLD). D E Shaw had $4.5 million invested in the company at the end of the quarter. Israel Englander’s Millennium Management also initiated a $1.7 million position during the quarter. The other funds with new positions in the stock are Brad Dunkley and Blair Levinsky’s Waratah Capital Advisors, Donald Sussman’s Paloma Partners, and John Overdeck and David Siegel’s Two Sigma Advisors.

Let’s now take a look at hedge fund activity in other stocks – not necessarily in the same industry as Royal Gold, Inc (NASDAQ:RGLD) but similarly valued. We will take a look at Sensata Technologies Holding N.V. (NYSE:ST), ABIOMED, Inc. (NASDAQ:ABMD), Pool Corporation (NASDAQ:POOL), and Vedanta Ltd (NYSE:VEDL). This group of stocks’ market valuations are similar to RGLD’s market valuation.

As you can see these stocks had an average of 19.25 hedge funds with bullish positions and the average amount invested in these stocks was $604 million. That figure was $127 million in RGLD’s case. Pool Corporation (NASDAQ:POOL) is the most popular stock in this table. On the other hand Vedanta Ltd (NYSE:VEDL) is the least popular one with only 10 bullish hedge fund positions. Royal Gold, Inc (NASDAQ:RGLD) is not the most popular stock in this group but hedge fund interest is still above average. Our calculations showed that top 20 most popular stocks among hedge funds returned 41.3% in 2019 and outperformed the S&P 500 ETF (SPY) by 10.1 percentage points. Hedge funds were also right about betting on RGLD as the stock returned 44.3% in 2019 and outperformed the market. Hedge funds were rewarded for their relative bullishness.