How Did Phillips 66 (PSX) Compare Against Top Hedge Fund Stocks in 2019?

Phillips 66 (NYSE:PSX) has seen a decrease in activity from the world’s largest hedge funds of late. Our calculations also showed that PSX isn’t among the 30 most popular stocks among hedge funds (click for Q3 rankings and see the video at the end of this article for Q2 rankings).

We leave no stone unturned when looking for the next great investment idea. For example Discover is offering this insane cashback card, so we look into shorting the stock. One of the most bullish analysts in America just put his money where his mouth is. He says, “I’m investing more today than I did back in early 2009.” So we check out his pitch. We read hedge fund investor letters and listen to stock pitches at hedge fund conferences. We even check out this option genius’ weekly trade ideas. This December, we recommended Adams Energy as a one-way bet based on an under-the-radar fund manager’s investor letter and the stock already gained 20 percent. Now let’s take a look at the key hedge fund action encompassing Phillips 66 (NYSE:PSX).

How have hedgies been trading Phillips 66 (NYSE:PSX)? 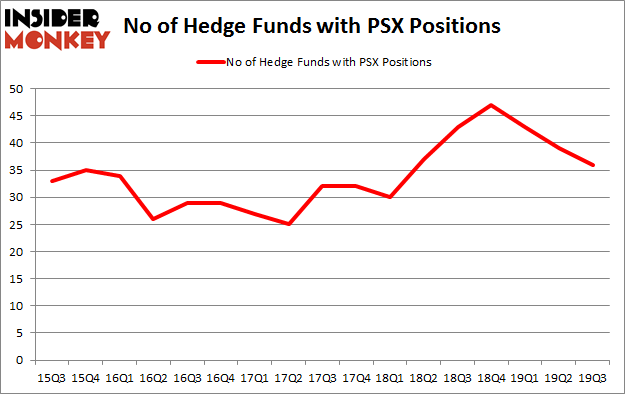 According to publicly available hedge fund and institutional investor holdings data compiled by Insider Monkey, Berkshire Hathaway, managed by Warren Buffett, holds the number one position in Phillips 66 (NYSE:PSX). Berkshire Hathaway has a $530.7 million position in the stock, comprising 0.2% of its 13F portfolio. Coming in second is Cliff Asness of AQR Capital Management, with a $192.7 million position; 0.2% of its 13F portfolio is allocated to the stock. Some other peers that are bullish comprise David E. Shaw’s D E Shaw, Steven Richman’s RR Partners and John Overdeck and David Siegel’s Two Sigma Advisors. In terms of the portfolio weights assigned to each position RR Partners allocated the biggest weight to Phillips 66 (NYSE:PSX), around 10.37% of its 13F portfolio. Beech Hill Partners is also relatively very bullish on the stock, earmarking 2.18 percent of its 13F equity portfolio to PSX.

Seeing as Phillips 66 (NYSE:PSX) has experienced a decline in interest from the smart money, it’s easy to see that there were a few funds that elected to cut their full holdings by the end of the third quarter. Interestingly, Joel Greenblatt’s Gotham Asset Management said goodbye to the biggest investment of all the hedgies tracked by Insider Monkey, comprising about $34 million in stock, and Vince Maddi and Shawn Brennan’s SIR Capital Management was right behind this move, as the fund dropped about $22.5 million worth. These transactions are intriguing to say the least, as total hedge fund interest fell by 3 funds by the end of the third quarter.

Let’s now review hedge fund activity in other stocks – not necessarily in the same industry as Phillips 66 (NYSE:PSX) but similarly valued. We will take a look at Honda Motor Co Ltd (NYSE:HMC), Edwards Lifesciences Corporation (NYSE:EW), Aon plc (NYSE:AON), and The Progressive Corporation (NYSE:PGR). All of these stocks’ market caps are closest to PSX’s market cap.

As you can see these stocks had an average of 33.5 hedge funds with bullish positions and the average amount invested in these stocks was $1389 million. That figure was $1315 million in PSX’s case. The Progressive Corporation (NYSE:PGR) is the most popular stock in this table. On the other hand Honda Motor Co Ltd (NYSE:HMC) is the least popular one with only 10 bullish hedge fund positions. Phillips 66 (NYSE:PSX) is not the most popular stock in this group but hedge fund interest is still above average. Our calculations showed that top 20 most popular stocks among hedge funds returned 41.1% in 2019 through December 23rd and outperformed the S&P 500 ETF (SPY) by 10.1 percentage points. Hedge funds were also right about betting on PSX, though not to the same extent, as the stock returned 35.5% during 2019 (as of 12/23) and outperformed the market as well.