How Did Mastercard Incorporated (NYSE:MA) Compare Against Top Hedge Fund Stocks in 2019?

While the market driven by short-term sentiment influenced by the accomodative interest rate environment in the US, increasing oil prices and deteriorating expectations towards the resolution of the trade war with China, many smart money investors kept their cautious approach regarding the current bull run in the third quarter and hedging or reducing many of their long positions. Some fund managers are betting on Dow hitting 40,000 to generate strong returns. However, as we know, big investors usually buy stocks with strong fundamentals that can deliver gains both in bull and bear markets, which is why we believe we can profit from imitating them. In this article, we are going to take a look at the smart money sentiment surrounding Mastercard Incorporated (NYSE:MA) and see how the stock performed in comparison to hedge funds’ consensus picks.

Mastercard Incorporated (NYSE:MA) shareholders have witnessed an increase in hedge fund sentiment of late. MA was in 114 hedge funds’ portfolios at the end of September. There were 99 hedge funds in our database with MA positions at the end of the previous quarter. Our calculations also showed that MA currently ranks #8 among the 30 most popular stocks among hedge funds (click for Q3 rankings and see the video at the end of this article for Q2 rankings).

We leave no stone unturned when looking for the next great investment idea. For example Discover is offering this insane cashback card, so we look into shorting the stock. One of the most bullish analysts in America just put his money where his mouth is. He says, “I’m investing more today than I did back in early 2009.” So we check out his pitch. We read hedge fund investor letters and listen to stock pitches at hedge fund conferences. We even check out this option genius’ weekly trade ideas. This December, we recommended Adams Energy as a one-way bet based on an under-the-radar fund manager’s investor letter and the stock already gained 20 percent. Now let’s take a glance at the recent hedge fund action regarding Mastercard Incorporated (NYSE:MA).

How have hedgies been trading Mastercard Incorporated (NYSE:MA)?

At the end of the third quarter, a total of 114 of the hedge funds tracked by Insider Monkey were bullish on this stock, a change of 15% from the second quarter of 2019. On the other hand, there were a total of 95 hedge funds with a bullish position in MA a year ago. With the smart money’s positions undergoing their usual ebb and flow, there exists a few notable hedge fund managers who were boosting their holdings significantly (or already accumulated large positions). 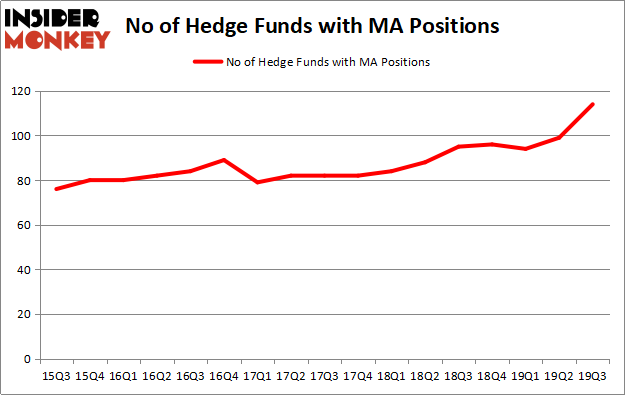 More specifically, Gardner Russo & Gardner was the largest shareholder of Mastercard Incorporated (NYSE:MA), with a stake worth $1812 million reported as of the end of September. Trailing Gardner Russo & Gardner was Akre Capital Management, which amassed a stake valued at $1446.7 million. Berkshire Hathaway, Arrowstreet Capital, and GQG Partners were also very fond of the stock, becoming one of the largest hedge fund holders of the company. In terms of the portfolio weights assigned to each position KG Funds Management allocated the biggest weight to Mastercard Incorporated (NYSE:MA), around 17.52% of its 13F portfolio. Akre Capital Management is also relatively very bullish on the stock, designating 14.26 percent of its 13F equity portfolio to MA.

As you can see these stocks had an average of 65.75 hedge funds with bullish positions and the average amount invested in these stocks was $10984 million. That figure was $13207 million in MA’s case. Bank of America Corporation (NYSE:BAC) is the most popular stock in this table. On the other hand Taiwan Semiconductor Mfg. Co. Ltd. (NYSE:TSM) is the least popular one with only 52 bullish hedge fund positions. Compared to these stocks Mastercard Incorporated (NYSE:MA) is more popular among hedge funds. Our calculations showed that top 20 most popular stocks among hedge funds returned 41.1% in 2019 through December 23rd and outperformed the S&P 500 ETF (SPY) by 10.1 percentage points. Hedge funds were also right about betting on MA as the stock returned 58.5% so far in 2019 (through 12/23) and outperformed the market by an even larger margin. Hedge funds were clearly right about piling into this stock relative to other stocks with similar market capitalizations.

Is TC Pipelines, LP (TCP) Going to Burn These Hedge Funds?
Monthly Newsletter Strategy
Download a free copy of our newsletter and see the details inside!
Hedge Fund Resource Center
Related News
Hedge Funds Have Never Been More Bullish On This Stock 5 Most Popular Financial Stocks Among Hedge Funds Hedge Funds Have Never Been This Bullish On Mastercard (MA) 30 Most Popular Stocks Among Hedge Funds in Q2 of 2019 Hedge Fund and Insider Trading News: David Einhorn, Michael Hintze, Neil Woodford, Och-Ziff Capital Management, Universal Forest Products, Inc. (UFPI), Bristol-Myers Squibb Co (BMY), and More How Mastercard and Other Hedge Fund Favorites Performed in Q2 Chuck Akre Interview – “Three-Legged Stool”, Curiosity, Imagination, and Other Tricks of the Trade 11 Companies That Caught Lying To The Public, Deceived Customers 10 Countries with the Highest Coffee Consumption in the World 10 Stocks That Went Up During The 2008 Crash
Billionaire Hedge Funds