How Did Churchill Downs Incorporated (CHDN) Compare Against Hedge Fund Darlings in 2019?

Hedge fund interest in Churchill Downs Incorporated (NASDAQ:CHDN) shares was flat at the end of last quarter. This is usually a negative indicator. At the end of this article we will also compare CHDN to other stocks including MAXIMUS, Inc. (NYSE:MMS), Millicom International Cellular S.A. (NASDAQ:TIGO), and Life Storage, Inc. (NYSE:LSI) to get a better sense of its popularity.

We leave no stone unturned when looking for the next great investment idea. For example Europe is set to become the world’s largest cannabis market, so we check out this European marijuana stock pitch. We read hedge fund investor letters and listen to stock pitches at hedge fund conferences. This December, we recommended Adams Energy as a one-way bet based on an under-the-radar fund manager’s investor letter and the stock is still extremely cheap despite already gaining 20 percent. Keeping this in mind we’re going to take a glance at the new hedge fund action surrounding Churchill Downs Incorporated (NASDAQ:CHDN).

How have hedgies been trading Churchill Downs Incorporated (NASDAQ:CHDN)?

At the end of the third quarter, a total of 25 of the hedge funds tracked by Insider Monkey held long positions in this stock, a change of 0% from the second quarter of 2019. The graph below displays the number of hedge funds with bullish position in CHDN over the last 17 quarters. With hedge funds’ positions undergoing their usual ebb and flow, there exists an “upper tier” of key hedge fund managers who were boosting their stakes significantly (or already accumulated large positions). 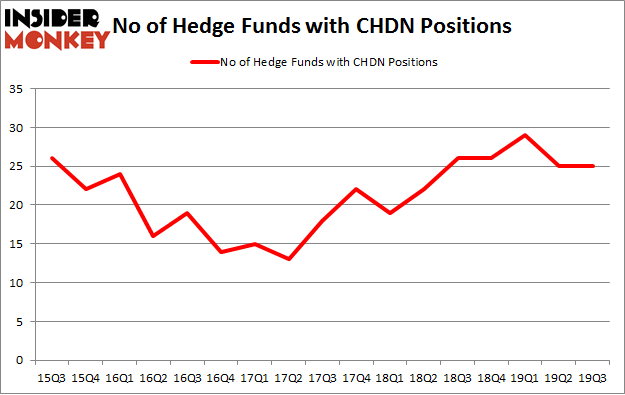 Seeing as Churchill Downs Incorporated (NASDAQ:CHDN) has faced falling interest from hedge fund managers, we can see that there exists a select few money managers that slashed their positions entirely by the end of the third quarter. At the top of the heap, Sara Nainzadeh’s Centenus Global Management dumped the biggest investment of the 750 funds followed by Insider Monkey, valued at an estimated $2.3 million in stock, and Minhua Zhang’s Weld Capital Management was right behind this move, as the fund said goodbye to about $0.3 million worth. These bearish behaviors are important to note, as total hedge fund interest stayed the same (this is a bearish signal in our experience).

As you can see these stocks had an average of 16 hedge funds with bullish positions and the average amount invested in these stocks was $303 million. That figure was $721 million in CHDN’s case. MAXIMUS, Inc. (NYSE:MMS) is the most popular stock in this table. On the other hand Millicom International Cellular S.A. (NASDAQ:TIGO) is the least popular one with only 6 bullish hedge fund positions. Compared to these stocks Churchill Downs Incorporated (NASDAQ:CHDN) is more popular among hedge funds. Our calculations showed that top 20 most popular stocks among hedge funds returned 41.3% in 2019 and outperformed the S&P 500 ETF (SPY) by 10.1 percentage points. Hedge funds were also right about betting on CHDN as the stock returned 69.5% in 2019 and outperformed the market by an even larger margin. Hedge funds were clearly right about piling into this stock relative to other stocks with similar market capitalizations.