How Did Bausch Health Companies (BHC) Compare Against Top Hedge Fund Stocks in 2019?

Many investors, including Paul Tudor Jones or Stan Druckenmiller, have been saying before last year’s Q4 market crash that the stock market is overvalued due to a low interest rate environment that leads to companies swapping their equity for debt and focusing mostly on short-term performance such as beating the quarterly earnings estimates. In the first half of 2019, most investors recovered all of their Q4 losses as sentiment shifted and optimism dominated the US China trade negotiations. Nevertheless, many of the stocks that delivered strong returns in the first half still sport strong fundamentals and their gains were more related to the general market sentiment rather than their individual performance and hedge funds kept their bullish stance. In this article we will find out how hedge fund sentiment to Bausch Health Companies (NYSE:BHC) changed recently.

Bausch Health Companies (NYSE:BHC) has experienced an increase in support from the world’s most elite money managers of late. Our calculations also showed that BHC isn’t among the 30 most popular stocks among hedge funds (click for Q3 rankings and see the video at the end of this article for Q2 rankings).

According to most traders, hedge funds are viewed as unimportant, old investment tools of yesteryear. While there are more than 8000 funds in operation at present, We look at the bigwigs of this group, around 750 funds. It is estimated that this group of investors watch over the majority of the hedge fund industry’s total capital, and by monitoring their top equity investments, Insider Monkey has deciphered a few investment strategies that have historically exceeded the broader indices. Insider Monkey’s flagship short hedge fund strategy beat the S&P 500 short ETFs by around 20 percentage points annually since its inception in May 2014. Our portfolio of short stocks lost 27.8% since February 2017 (through November 21st) even though the market was up more than 39% during the same period. We just shared a list of 7 short targets in our latest quarterly update .

We leave no stone unturned when looking for the next great investment idea. For example Discover is offering this insane cashback card, so we look into shorting the stock. One of the most bullish analysts in America just put his money where his mouth is. He says, “I’m investing more today than I did back in early 2009.” So we check out his pitch. We read hedge fund investor letters and listen to stock pitches at hedge fund conferences. We even check out this option genius’ weekly trade ideas. This December, we recommended Adams Energy as a one-way bet based on an under-the-radar fund manager’s investor letter and the stock already gained 20 percent. With all of this in mind let’s take a glance at the key hedge fund action regarding Bausch Health Companies (NYSE:BHC).

How have hedgies been trading Bausch Health Companies (NYSE:BHC)?

At Q3’s end, a total of 32 of the hedge funds tracked by Insider Monkey were bullish on this stock, a change of 3% from one quarter earlier. Below, you can check out the change in hedge fund sentiment towards BHC over the last 17 quarters. With hedgies’ sentiment swirling, there exists a few noteworthy hedge fund managers who were upping their stakes considerably (or already accumulated large positions). 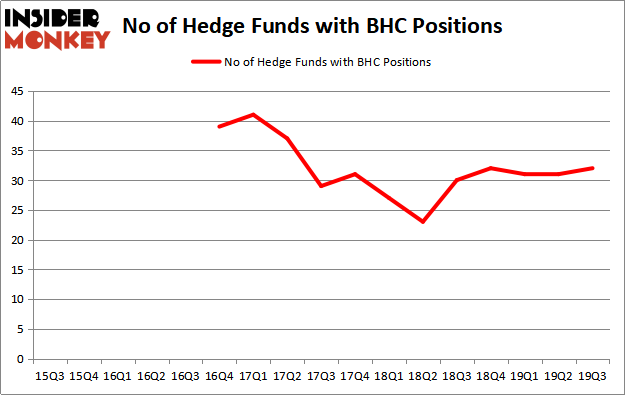 When looking at the institutional investors followed by Insider Monkey, John Paulson’s Paulson & Co has the most valuable position in Bausch Health Companies (NYSE:BHC), worth close to $455.3 million, amounting to 9.1% of its total 13F portfolio. The second most bullish fund manager is Jeffrey Ubben of ValueAct Capital, with a $391.8 million position; 4.2% of its 13F portfolio is allocated to the stock. Other members of the smart money with similar optimism comprise Larry Robbins’s Glenview Capital, Steven Tananbaum’s GoldenTree Asset Management and Renaissance Technologies. In terms of the portfolio weights assigned to each position Chou Associates Management allocated the biggest weight to Bausch Health Companies (NYSE:BHC), around 21.99% of its 13F portfolio. GoldenTree Asset Management is also relatively very bullish on the stock, earmarking 21.49 percent of its 13F equity portfolio to BHC.

As aggregate interest increased, key hedge funds have been driving this bullishness. PEAK6 Capital Management, managed by Matthew Hulsizer, established the most valuable position in Bausch Health Companies (NYSE:BHC). PEAK6 Capital Management had $3.7 million invested in the company at the end of the quarter. Peter Muller’s PDT Partners also made a $2.7 million investment in the stock during the quarter. The other funds with brand new BHC positions are Minhua Zhang’s Weld Capital Management, Donald Sussman’s Paloma Partners, and Gavin Saitowitz and Cisco J. del Valle’s Springbok Capital.

As you can see these stocks had an average of 26.75 hedge funds with bullish positions and the average amount invested in these stocks was $759 million. That figure was $1808 million in BHC’s case. Voya Financial Inc (NYSE:VOYA) is the most popular stock in this table. On the other hand Perrigo Company (NASDAQ:PRGO) is the least popular one with only 15 bullish hedge fund positions. Bausch Health Companies (NYSE:BHC) is not the most popular stock in this group but hedge fund interest is still above average. Our calculations showed that top 20 most popular stocks among hedge funds returned 41.1% in 2019 through December 23rd and outperformed the S&P 500 ETF (SPY) by 10.1 percentage points. Hedge funds were also right about betting on BHC as the stock returned 61.9% in 2019 (through December 23rd) and outperformed the market. Hedge funds were rewarded for their relative bullishness.