Although the masses and most of the financial media blame hedge funds for their exorbitant fee structure and disappointing performance, these investors have proved to have great stock picking abilities over the years (that’s why their assets under management continue to swell). We believe hedge fund sentiment should serve as a crucial tool of an individual investor’s stock selection process, as it may offer great insights of how the brightest minds of the finance industry feel about specific stocks. After all, these people have access to smartest analysts and expensive data/information sources that individual investors can’t match. So should one consider investing in HollyFrontier Corporation (NYSE:HFC)? The smart money sentiment can provide an answer to this question.

HollyFrontier Corporation (NYSE:HFC) shares haven’t seen a lot of action during the second quarter. Overall, hedge fund sentiment was unchanged. The stock was in 25 hedge funds’ portfolios at the end of June. The level and the change in hedge fund popularity aren’t the only variables you need to analyze to decipher hedge funds’ perspectives. A stock may witness a boost in popularity but it may still be less popular than similarly priced stocks. That’s why at the end of this article we will examine companies such as Alaska Air Group, Inc. (NYSE:ALK), Zayo Group Holdings Inc (NYSE:ZAYO), and Alnylam Pharmaceuticals, Inc. (NASDAQ:ALNY) to gather more data points. Our calculations also showed that HFC isn’t among the 30 most popular stocks among hedge funds (see the video below). 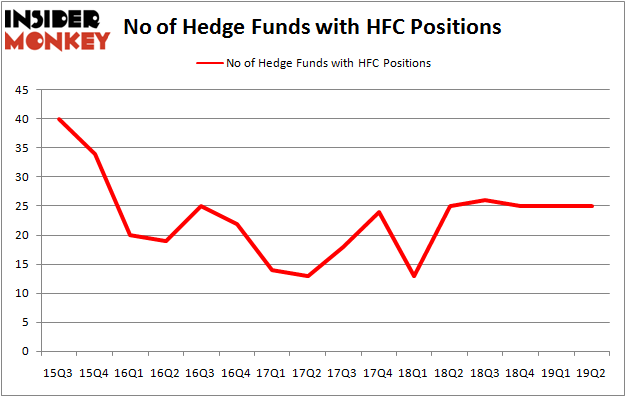 Unlike this former hedge fund manager who is convinced Dow will soar past 40000, our long-short investment strategy doesn’t rely on bull markets to deliver double digit returns. We only rely on hedge fund buy/sell signals. Let’s take a gander at the key hedge fund action encompassing HollyFrontier Corporation (NYSE:HFC).

What have hedge funds been doing with HollyFrontier Corporation (NYSE:HFC)?

Among these funds, AQR Capital Management held the most valuable stake in HollyFrontier Corporation (NYSE:HFC), which was worth $243.2 million at the end of the second quarter. On the second spot was D E Shaw which amassed $65.9 million worth of shares. Moreover, Encompass Capital Advisors, Millennium Management, and Balyasny Asset Management were also bullish on HollyFrontier Corporation (NYSE:HFC), allocating a large percentage of their portfolios to this stock.

Seeing as HollyFrontier Corporation (NYSE:HFC) has witnessed declining sentiment from hedge fund managers, it’s easy to see that there lies a certain “tier” of fund managers who were dropping their entire stakes in the second quarter. It’s worth mentioning that David Costen Haley’s HBK Investments said goodbye to the biggest position of all the hedgies watched by Insider Monkey, comprising close to $3.9 million in stock. Andrew Feldstein and Stephen Siderow’s fund, Blue Mountain Capital, also said goodbye to its stock, about $3.3 million worth. These transactions are intriguing to say the least, as total hedge fund interest stayed the same (this is a bearish signal in our experience).

As you can see these stocks had an average of 35.5 hedge funds with bullish positions and the average amount invested in these stocks was $1229 million. That figure was $597 million in HFC’s case. Zayo Group Holdings Inc (NYSE:ZAYO) is the most popular stock in this table. On the other hand Alaska Air Group, Inc. (NYSE:ALK) is the least popular one with only 22 bullish hedge fund positions. HollyFrontier Corporation (NYSE:HFC) is not the least popular stock in this group but hedge fund interest is still below average. Our calculations showed that top 20 most popular stocks among hedge funds returned 24.4% in 2019 through September 30th and outperformed the S&P 500 ETF (SPY) by 4 percentage points. A small number of hedge funds were also right about betting on HFC as the stock returned 16.7% during the same time frame and outperformed the market by an even larger margin.