A whopping number of 13F filings filed with U.S. Securities and Exchange Commission has been processed by Insider Monkey so that individual investors can look at the overall hedge fund sentiment towards the stocks included in their watchlists. These freshly-submitted public filings disclose money managers’ equity positions as of the end of the three-month period that ended June 28, so let’s proceed with the discussion of the hedge fund sentiment on Hibbett Sports, Inc. (NASDAQ:HIBB).

Hibbett Sports, Inc. (NASDAQ:HIBB) shares haven’t seen a lot of action during the second quarter. Overall, hedge fund sentiment was unchanged, yet still bullish. The stock was in 15 hedge funds’ portfolios at the end of the second quarter of 2019. The level and the change in hedge fund popularity aren’t the only variables you need to analyze to decipher hedge funds’ perspectives. A stock may witness a boost in popularity but it may still be less popular than similarly priced stocks. That’s why at the end of this article we will examine companies such as Park Aerospace Corp.(NYSE:PKE), AMAG Pharmaceuticals, Inc. (NASDAQ:AMAG), and Limoneira Company (NASDAQ:LMNR) to gather more data points. Our calculations also showed that HIBB isn’t among the 30 most popular stocks among hedge funds (see the video below).

Unlike other investors who track every movement of the 25 largest hedge funds, our long-short investment strategy relies on hedge fund buy/sell signals given by the 100 best performing hedge funds. Let’s check out the recent hedge fund action regarding Hibbett Sports, Inc. (NASDAQ:HIBB).

How have hedgies been trading Hibbett Sports, Inc. (NASDAQ:HIBB)?

At Q2’s end, a total of 15 of the hedge funds tracked by Insider Monkey were bullish on this stock, a change of 0% from one quarter earlier. On the other hand, there were a total of 16 hedge funds with a bullish position in HIBB a year ago. With the smart money’s sentiment swirling, there exists a few key hedge fund managers who were increasing their holdings significantly (or already accumulated large positions). 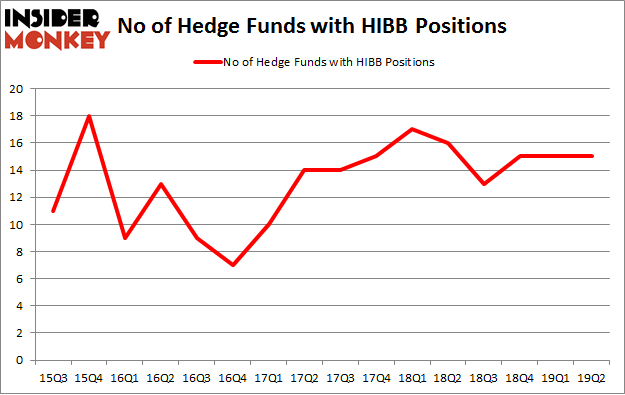 More specifically, Renaissance Technologies was the largest shareholder of Hibbett Sports, Inc. (NASDAQ:HIBB), with a stake worth $22.3 million reported as of the end of March. Trailing Renaissance Technologies was D E Shaw, which amassed a stake valued at $19.9 million. Citadel Investment Group, GLG Partners, and Balyasny Asset Management were also very fond of the stock, giving the stock large weights in their portfolios.

Since Hibbett Sports, Inc. (NASDAQ:HIBB) has experienced a decline in interest from hedge fund managers, it’s safe to say that there lies a certain “tier” of money managers that decided to sell off their positions entirely in the second quarter. It’s worth mentioning that Paul Marshall and Ian Wace’s Marshall Wace LLP dropped the biggest investment of all the hedgies followed by Insider Monkey, worth close to $17.4 million in call options, and Sander Gerber’s Hudson Bay Capital Management was right behind this move, as the fund sold off about $1.4 million worth. These moves are important to note, as total hedge fund interest stayed the same (this is a bearish signal in our experience).

As you can see these stocks had an average of 8 hedge funds with bullish positions and the average amount invested in these stocks was $56 million. That figure was $77 million in HIBB’s case. AMAG Pharmaceuticals, Inc. (NASDAQ:AMAG) is the most popular stock in this table. On the other hand Limoneira Company (NASDAQ:LMNR) is the least popular one with only 2 bullish hedge fund positions. Hibbett Sports, Inc. (NASDAQ:HIBB) is not the most popular stock in this group but hedge fund interest is still above average. Our calculations showed that top 20 most popular stocks among hedge funds returned 24.4% in 2019 through September 30th and outperformed the S&P 500 ETF (SPY) by 4 percentage points. Hedge funds were also right about betting on HIBB as the stock returned 25.8% during the third quarter and outperformed the market. Hedge funds were rewarded for their relative bullishness.