Yamana Gold Inc. (NYSE:AUY) investors should be aware of an increase in hedge fund interest lately. AUY was in 19 hedge funds’ portfolios at the end of the fourth quarter of 2018. There were 18 hedge funds in our database with AUY positions at the end of the previous quarter. Our calculations also showed that AUY isn’t among the 30 most popular stocks among hedge funds.

What have hedge funds been doing with Yamana Gold Inc. (NYSE:AUY)?

At the end of the fourth quarter, a total of 19 of the hedge funds tracked by Insider Monkey were long this stock, a change of 6% from the second quarter of 2018. The graph below displays the number of hedge funds with bullish position in AUY over the last 14 quarters. With hedgies’ capital changing hands, there exists an “upper tier” of notable hedge fund managers who were boosting their holdings meaningfully (or already accumulated large positions). 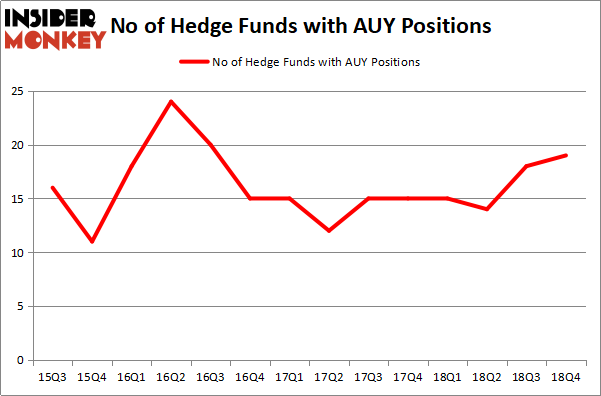 More specifically, Renaissance Technologies was the largest shareholder of Yamana Gold Inc. (NYSE:AUY), with a stake worth $26.6 million reported as of the end of September. Trailing Renaissance Technologies was Prince Street Capital Management, which amassed a stake valued at $10.6 million. AQR Capital Management, Citadel Investment Group, and Arrowstreet Capital were also very fond of the stock, giving the stock large weights in their portfolios.

As one would reasonably expect, key money managers have jumped into Yamana Gold Inc. (NYSE:AUY) headfirst. Arrowstreet Capital, managed by Peter Rathjens, Bruce Clarke and John Campbell, created the biggest position in Yamana Gold Inc. (NYSE:AUY). Arrowstreet Capital had $6.1 million invested in the company at the end of the quarter. Matthew Hulsizer’s PEAK6 Capital Management also initiated a $0.1 million position during the quarter. The only other fund with a new position in the stock is Peter S. Stamos’s Stamos Capital.