Y-mAbs Therapeutics, Inc. (NASDAQ:YMAB) investors should pay attention to a decrease in activity from the world’s largest hedge funds recently. Our calculations also showed that YMAB isn’t among the 30 most popular stocks among hedge funds.

Heading into the first quarter of 2019, a total of 6 of the hedge funds tracked by Insider Monkey were long this stock, a change of -45% from one quarter earlier. By comparison, 0 hedge funds held shares or bullish call options in YMAB a year ago. With hedgies’ sentiment swirling, there exists a few notable hedge fund managers who were upping their holdings substantially (or already accumulated large positions). 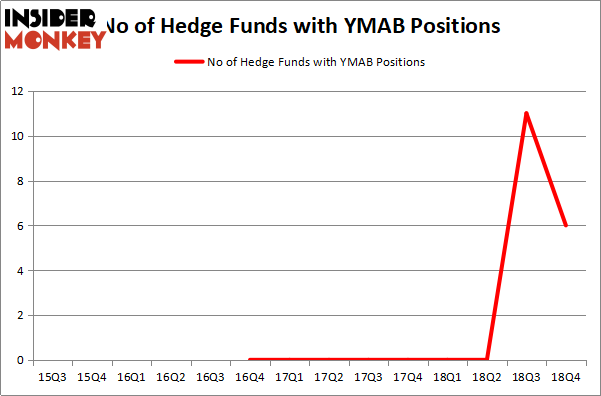 Among these funds, Scopia Capital held the most valuable stake in Y-mAbs Therapeutics, Inc. (NASDAQ:YMAB), which was worth $31.3 million at the end of the fourth quarter. On the second spot was Millennium Management which amassed $7.9 million worth of shares. Moreover, venBio Select Advisor, Cormorant Asset Management, and Baker Bros. Advisors were also bullish on Y-mAbs Therapeutics, Inc. (NASDAQ:YMAB), allocating a large percentage of their portfolios to this stock.

Since Y-mAbs Therapeutics, Inc. (NASDAQ:YMAB) has witnessed declining sentiment from the smart money, it’s safe to say that there is a sect of fund managers who were dropping their entire stakes heading into Q3. Interestingly, Thomas Steyer’s Farallon Capital sold off the largest investment of the “upper crust” of funds tracked by Insider Monkey, comprising close to $3.3 million in stock. Anand Parekh’s fund, Alyeska Investment Group, also said goodbye to its stock, about $1.3 million worth. These transactions are important to note, as total hedge fund interest dropped by 5 funds heading into Q3.

As you can see these stocks had an average of 10.75 hedge funds with bullish positions and the average amount invested in these stocks was $70 million. That figure was $52 million in YMAB’s case. FutureFuel Corp. (NYSE:FF) is the most popular stock in this table. On the other hand German American Bancorp., Inc. (NASDAQ:GABC) is the least popular one with only 4 bullish hedge fund positions. Y-mAbs Therapeutics, Inc. (NASDAQ:YMAB) is not the least popular stock in this group but hedge fund interest is still below average. Our calculations showed that top 15 most popular stocks) among hedge funds returned 24.2% through April 22nd and outperformed the S&P 500 ETF (SPY) by more than 7 percentage points. A small number of hedge funds were also right about betting on YMAB, though not to the same extent, as the stock returned 18.6% and outperformed the market as well.