Xencor Inc (NASDAQ:XNCR) was in 13 hedge funds’ portfolios at the end of the fourth quarter of 2018. XNCR shareholders have witnessed a decrease in activity from the world’s largest hedge funds lately. There were 15 hedge funds in our database with XNCR positions at the end of the previous quarter. Our calculations also showed that XNCR isn’t among the 30 most popular stocks among hedge funds.

We’re going to take a glance at the new hedge fund action regarding Xencor Inc (NASDAQ:XNCR).

What does the smart money think about Xencor Inc (NASDAQ:XNCR)?

At the end of the fourth quarter, a total of 13 of the hedge funds tracked by Insider Monkey were bullish on this stock, a change of -13% from the previous quarter. Below, you can check out the change in hedge fund sentiment towards XNCR over the last 14 quarters. With hedgies’ positions undergoing their usual ebb and flow, there exists an “upper tier” of noteworthy hedge fund managers who were boosting their stakes meaningfully (or already accumulated large positions). 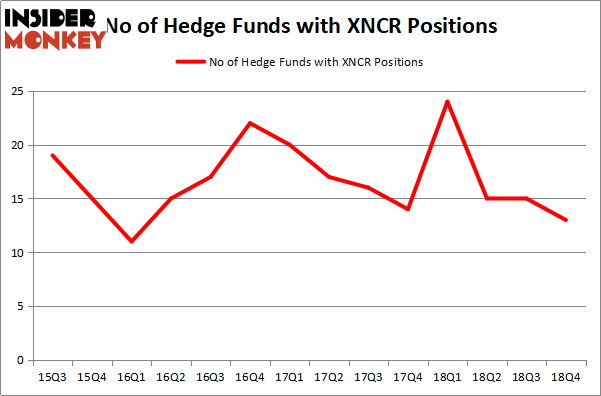 According to Insider Monkey’s hedge fund database, Jeremy Green’s Redmile Group has the number one position in Xencor Inc (NASDAQ:XNCR), worth close to $111.5 million, corresponding to 4.5% of its total 13F portfolio. The second most bullish fund manager is EcoR1 Capital, led by Oleg Nodelman, holding a $35.8 million position; 3.6% of its 13F portfolio is allocated to the company. Other hedge funds and institutional investors that are bullish consist of Mark Lampert’s Biotechnology Value Fund / BVF Inc, Julian Baker and Felix Baker’s Baker Bros. Advisors and Joseph Edelman’s Perceptive Advisors.

Due to the fact that Xencor Inc (NASDAQ:XNCR) has witnessed declining sentiment from the smart money, logic holds that there were a few hedgies that elected to cut their entire stakes last quarter. Interestingly, Dmitry Balyasny’s Balyasny Asset Management dropped the biggest stake of all the hedgies followed by Insider Monkey, totaling about $2.5 million in stock, and Michael Platt and William Reeves’s BlueCrest Capital Mgmt. was right behind this move, as the fund said goodbye to about $0.4 million worth. These moves are interesting, as total hedge fund interest was cut by 2 funds last quarter.

As you can see these stocks had an average of 15 hedge funds with bullish positions and the average amount invested in these stocks was $189 million. That figure was $211 million in XNCR’s case. The Ensign Group, Inc. (NASDAQ:ENSG) is the most popular stock in this table. On the other hand Terex Corporation (NYSE:TEX) is the least popular one with only 13 bullish hedge fund positions. Compared to these stocks Xencor Inc (NASDAQ:XNCR) is even less popular than TEX. Hedge funds dodged a bullet by taking a bearish stance towards XNCR. Our calculations showed that the top 15 most popular hedge fund stocks returned 24.2% through April 22nd and outperformed the S&P 500 ETF (SPY) by more than 7 percentage points. Unfortunately XNCR wasn’t nearly as popular as these 15 stock (hedge fund sentiment was very bearish); XNCR investors were disappointed as the stock returned -11.6% and underperformed the market. If you are interested in investing in large cap stocks with huge upside potential, you should check out the top 15 most popular stocks) among hedge funds as 13 of these stocks already outperformed the market this year.