During the fourth quarter the Russell 2000 ETF (IWM) lagged the larger S&P 500 ETF (SPY) by nearly 7 percentage points as investors worried over the possible ramifications of rising interest rates. The hedge funds and institutional investors we track typically invest more in smaller-cap stocks than an average investor (i.e. only 298 S&P 500 constituents were among the 500 most popular stocks among hedge funds), and we have seen data that shows those funds paring back their overall exposure. Those funds cutting positions in small-caps is one reason why volatility has increased. In the following paragraphs, we take a closer look at what hedge funds and prominent investors think of Wintrust Financial Corporation (NASDAQ:WTFC) and see how the stock is affected by the recent hedge fund activity.

Hedge fund interest in Wintrust Financial Corporation (NASDAQ:WTFC) shares was flat at the end of last quarter. This is usually a negative indicator. The level and the change in hedge fund popularity aren’t the only variables you need to analyze to decipher hedge funds’ perspectives. A stock may witness a boost in popularity but it may still be less popular than similarly priced stocks. That’s why at the end of this article we will examine companies such as Carter’s, Inc. (NYSE:CRI), Coupa Software Incorporated (NASDAQ:COUP), and Amedisys Inc (NASDAQ:AMED) to gather more data points.

In the eyes of most market participants, hedge funds are seen as slow, old investment vehicles of yesteryear. While there are over 8000 funds trading at the moment, Our researchers look at the bigwigs of this group, approximately 750 funds. It is estimated that this group of investors shepherd the lion’s share of the smart money’s total capital, and by shadowing their best picks, Insider Monkey has found a number of investment strategies that have historically outrun Mr. Market. Insider Monkey’s flagship hedge fund strategy exceeded the S&P 500 index by nearly 5 percentage points annually since its inception in May 2014 through early November 2018. We were able to generate large returns even by identifying short candidates. Our portfolio of short stocks lost 27.5% since February 2017 (through March 12th) even though the market was up nearly 25% during the same period. We just shared a list of 6 short targets in our latest quarterly update and they are already down an average of 6% in less than a month.

What does the smart money think about Wintrust Financial Corporation (NASDAQ:WTFC)?

At Q4’s end, a total of 24 of the hedge funds tracked by Insider Monkey were long this stock, a change of 0% from one quarter earlier. The graph below displays the number of hedge funds with bullish position in WTFC over the last 14 quarters. With hedgies’ positions undergoing their usual ebb and flow, there exists a select group of notable hedge fund managers who were upping their stakes considerably (or already accumulated large positions). 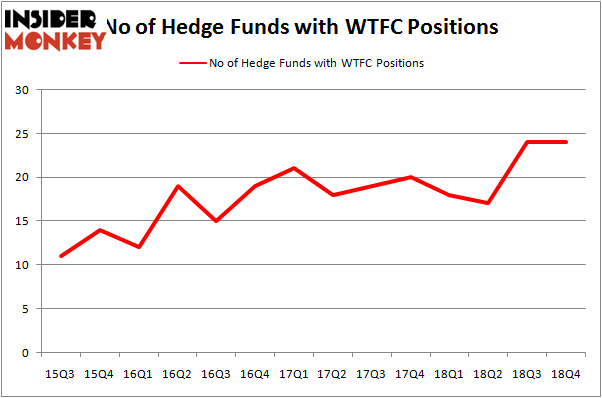 Among these funds, Millennium Management held the most valuable stake in Wintrust Financial Corporation (NASDAQ:WTFC), which was worth $127.9 million at the end of the third quarter. On the second spot was Citadel Investment Group which amassed $84.4 million worth of shares. Moreover, Fisher Asset Management, Renaissance Technologies, and D E Shaw were also bullish on Wintrust Financial Corporation (NASDAQ:WTFC), allocating a large percentage of their portfolios to this stock.

Because Wintrust Financial Corporation (NASDAQ:WTFC) has experienced declining sentiment from the smart money, it’s easy to see that there were a few money managers that slashed their full holdings heading into Q3. Interestingly, Ravi Chopra’s Azora Capital sold off the largest investment of the 700 funds watched by Insider Monkey, totaling close to $77.4 million in stock. Principal Global Investors’s fund, Columbus Circle Investors, also dumped its stock, about $20.4 million worth. These bearish behaviors are important to note, as aggregate hedge fund interest stayed the same (this is a bearish signal in our experience).

As you can see these stocks had an average of 27.75 hedge funds with bullish positions and the average amount invested in these stocks was $473 million. That figure was $373 million in WTFC’s case. Coupa Software Incorporated (NASDAQ:COUP) is the most popular stock in this table. On the other hand Deckers Outdoor Corp (NYSE:DECK) is the least popular one with only 21 bullish hedge fund positions. Wintrust Financial Corporation (NASDAQ:WTFC) is not the least popular stock in this group but hedge fund interest is still below average. This is a slightly negative signal and we’d rather spend our time researching stocks that hedge funds are piling on. Our calculations showed that top 15 most popular stocks) among hedge funds returned 24.2% through April 22nd and outperformed the S&P 500 ETF (SPY) by more than 7 percentage points. Unfortunately WTFC wasn’t nearly as popular as these 15 stock (hedge fund sentiment was quite bearish); WTFC investors were disappointed as the stock returned 13.8% and underperformed the market. If you are interested in investing in large cap stocks with huge upside potential, you should check out the top 15 most popular stocks) among hedge funds as 13 of these stocks already outperformed the market this year.