Is Western Digital Corporation (NASDAQ:WDC) a good stock to buy now? Investors who are in the know are becoming more confident. The number of long hedge fund positions improved by 8 in recent months. Our calculations also showed that wdc isn’t among the 30 most popular stocks among hedge funds. 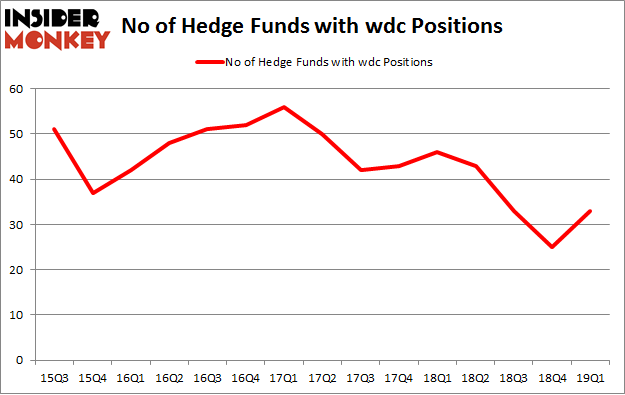 The largest stake in Western Digital Corporation (NASDAQ:WDC) was held by Renaissance Technologies, which reported holding $138.6 million worth of stock at the end of March. It was followed by Citadel Investment Group with a $99.2 million position. Other investors bullish on the company included Maplelane Capital, KCL Capital, and D E Shaw.

As industrywide interest jumped, some big names were leading the bulls’ herd. Maplelane Capital, managed by Leon Shaulov, assembled the biggest call position in Western Digital Corporation (NASDAQ:WDC). Maplelane Capital had $50.2 million invested in the company at the end of the quarter. Kevin Cottrell and Chris LaSusa’s KCL Capital also initiated a $33.6 million position during the quarter. The other funds with new positions in the stock are Brandon Haley’s Holocene Advisors, Kevin Cottrell and Chris LaSusa’s KCL Capital, and Leon Shaulov’s Maplelane Capital.

As you can see these stocks had an average of 12 hedge funds with bullish positions and the average amount invested in these stocks was $3553 million. That figure was $388 million in WDC’s case. Teleflex Incorporated (NYSE:TFX) is the most popular stock in this table. On the other hand Icahn Enterprises LP (NASDAQ:IEP) is the least popular one with only 5 bullish hedge fund positions. Compared to these stocks Western Digital Corporation (NASDAQ:WDC) is more popular among hedge funds. Our calculations showed that top 20 most popular stocks among hedge funds returned 1.9% in Q2 through May 30th and outperformed the S&P 500 ETF (SPY) by more than 3 percentage points. Unfortunately WDC wasn’t nearly as popular as these 20 stocks and hedge funds that were betting on WDC were disappointed as the stock returned -17.9% during the same period and underperformed the market. If you are interested in investing in large cap stocks with huge upside potential, you should check out the top 20 most popular stocks among hedge funds as 13 of these stocks already outperformed the market in Q2.