Does United Bankshares, Inc. (NASDAQ:UBSI) represent a good buying opportunity at the moment? Let’s briefly check the hedge fund interest towards the company. Hedge fund firms constantly search out bright intellectuals and highly-experienced employees and throw away millions of dollars on satellite photos and other research activities, so it is no wonder why they tend to generate millions in profits each year. It is also true that some hedge fund players fail inconceivably on some occasions, but net net their stock picks have been generating superior risk-adjusted returns on average over the years.

United Bankshares, Inc. (NASDAQ:UBSI) investors should pay attention to an increase in enthusiasm from smart money in recent months. UBSI was in 10 hedge funds’ portfolios at the end of December. There were 7 hedge funds in our database with UBSI positions at the end of the previous quarter. Our calculations also showed that ubsi isn’t among the 30 most popular stocks among hedge funds. 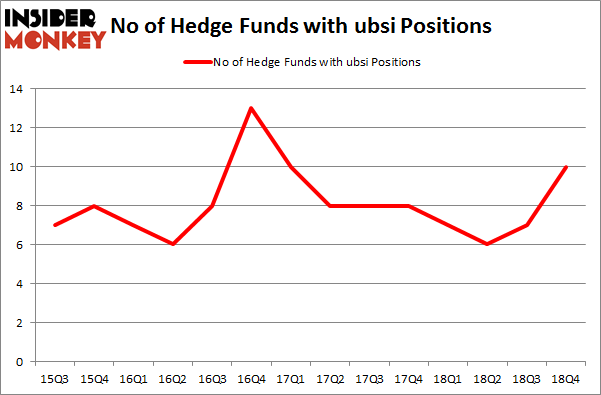 Of the funds tracked by Insider Monkey, Cardinal Capital, managed by Amy Minella, holds the most valuable position in United Bankshares, Inc. (NASDAQ:UBSI). Cardinal Capital has a $15.3 million position in the stock, comprising 0.6% of its 13F portfolio. The second largest stake is held by Matthew Lindenbaum of Basswood Capital, with a $5.6 million position; the fund has 0.3% of its 13F portfolio invested in the stock. Other professional money managers with similar optimism encompass D. E. Shaw’s D E Shaw, Noam Gottesman’s GLG Partners and Dmitry Balyasny’s Balyasny Asset Management.

With a general bullishness amongst the heavyweights, specific money managers have been driving this bullishness. D E Shaw, managed by D. E. Shaw, assembled the biggest position in United Bankshares, Inc. (NASDAQ:UBSI). D E Shaw had $1.7 million invested in the company at the end of the quarter. Dmitry Balyasny’s Balyasny Asset Management also made a $1.3 million investment in the stock during the quarter. The following funds were also among the new UBSI investors: Jim Simons’s Renaissance Technologies and Brandon Haley’s Holocene Advisors.

As you can see these stocks had an average of 18 hedge funds with bullish positions and the average amount invested in these stocks was $319 million. That figure was $28 million in UBSI’s case. ACI Worldwide Inc (NASDAQ:ACIW) is the most popular stock in this table. On the other hand CoreSite Realty Corp (NYSE:COR) is the least popular one with only 15 bullish hedge fund positions. Compared to these stocks United Bankshares, Inc. (NASDAQ:UBSI) is even less popular than COR. Our calculations showed that top 15 most popular stocks) among hedge funds returned 24.2% through April 22nd and outperformed the S&P 500 ETF (SPY) by more than 7 percentage points. A small number of hedge funds were also right about betting on UBSI, though not to the same extent, as the stock returned 23% and outperformed the market as well.