Many investors, including Paul Tudor Jones or Stan Druckenmiller, have been saying before the Q4 market crash that the stock market is overvalued due to a low interest rate environment that leads to companies swapping their equity for debt and focusing mostly on short-term performance such as beating the quarterly earnings estimates. In the fourth quarter, many investors lost money due to unpredictable events such as the sudden increase in long-term interest rates and unintended consequences of the trade war with China. Nevertheless, many of the stocks that tanked in the fourth quarter still sport strong fundamentals and their decline was more related to the general market sentiment rather than their individual performance and hedge funds kept their bullish stance. In this article we will find out how hedge fund sentiment to The York Water Company (NASDAQ:YORW) changed recently.

The York Water Company (NASDAQ:YORW) has seen a decrease in hedge fund interest lately. YORW was in 5 hedge funds’ portfolios at the end of the fourth quarter of 2018. There were 6 hedge funds in our database with YORW positions at the end of the previous quarter. Our calculations also showed that YORW isn’t among the 30 most popular stocks among hedge funds.

If you’d ask most investors, hedge funds are perceived as slow, outdated financial vehicles of years past. While there are more than 8000 funds in operation at present, Our researchers hone in on the top tier of this club, around 750 funds. These hedge fund managers direct bulk of the hedge fund industry’s total capital, and by keeping an eye on their best stock picks, Insider Monkey has determined a few investment strategies that have historically surpassed the broader indices. Insider Monkey’s flagship hedge fund strategy outstripped the S&P 500 index by nearly 5 percentage points a year since its inception in May 2014 through early November 2018. We were able to generate large returns even by identifying short candidates. Our portfolio of short stocks lost 27.5% since February 2017 (through March 12th) even though the market was up nearly 25% during the same period. We just shared a list of 6 short targets in our latest quarterly update and they are already down an average of 6% in less than a month.

What have hedge funds been doing with The York Water Company (NASDAQ:YORW)? 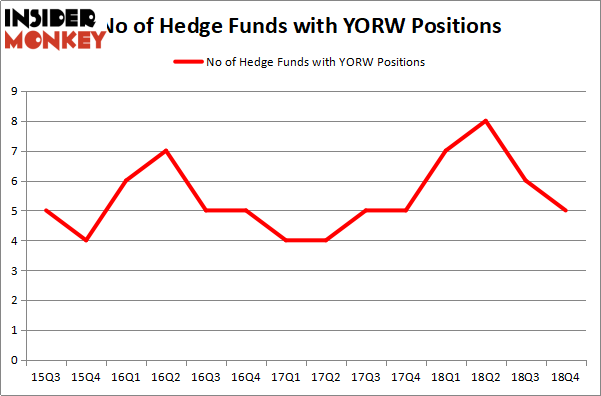 According to publicly available hedge fund and institutional investor holdings data compiled by Insider Monkey, Jim Simons’s Renaissance Technologies has the most valuable position in The York Water Company (NASDAQ:YORW), worth close to $8.6 million, amounting to less than 0.1%% of its total 13F portfolio. On Renaissance Technologies’s heels is Royce & Associates, led by Chuck Royce, holding a $4.4 million position; less than 0.1%% of its 13F portfolio is allocated to the company. Other hedge funds and institutional investors with similar optimism consist of Mario Gabelli’s GAMCO Investors, Israel Englander’s Millennium Management and D. E. Shaw’s D E Shaw.

We view hedge fund activity in the stock unfavorable, but in this case there was only a single hedge fund selling its entire position: Citadel Investment Group. One hedge fund selling its entire position doesn’t always imply a bearish intent. Theoretically a hedge fund may decide to sell a promising position in order to invest the proceeds in a more promising idea. However, we don’t think this is the case in this case because none of the 700+ hedge funds tracked by Insider Monkey identified YORW as a viable investment and initiated a position in the stock.

As you can see these stocks had an average of 9.5 hedge funds with bullish positions and the average amount invested in these stocks was $36 million. That figure was $15 million in YORW’s case. Great Lakes Dredge & Dock Corporation (NASDAQ:GLDD) is the most popular stock in this table. On the other hand Evelo Biosciences, Inc. (NASDAQ:EVLO) is the least popular one with only 3 bullish hedge fund positions. The York Water Company (NASDAQ:YORW) is not the least popular stock in this group but hedge fund interest is still below average. This is a slightly negative signal and we’d rather spend our time researching stocks that hedge funds are piling on. Our calculations showed that top 15 most popular stocks) among hedge funds returned 24.2% through April 22nd and outperformed the S&P 500 ETF (SPY) by more than 7 percentage points. Unfortunately YORW wasn’t nearly as popular as these 15 stock (hedge fund sentiment was quite bearish); YORW investors were disappointed as the stock returned 2.1% and underperformed the market. If you are interested in investing in large cap stocks with huge upside potential, you should check out the top 15 most popular stocks) among hedge funds as 13 of these stocks already outperformed the market this year.