Is The York Water Company (NASDAQ:YORW) a good stock to buy right now? We at Insider Monkey like to examine what billionaires and hedge funds think of a company before doing days of research on it. Given their 2 and 20 payment structure, hedge funds have more resources than the average investor. The funds have access to expert networks and get tips from industry insiders. They also have numerous Ivy League graduates and MBAs. Like everyone else, hedge funds perform miserably at times, but their consensus picks have historically outperformed the market after risk adjustments.

Is The York Water Company (NASDAQ:YORW) a splendid investment right now? Prominent investors are in a pessimistic mood. The number of long hedge fund bets went down by 2 in recent months. Our calculations also showed that YORW isn’t among the 30 most popular stocks among hedge funds. YORW was in 6 hedge funds’ portfolios at the end of the third quarter of 2018. There were 8 hedge funds in our database with YORW positions at the end of the previous quarter.

In the eyes of most investors, hedge funds are seen as underperforming, old investment vehicles of yesteryear. While there are more than 8,000 funds in operation today, We choose to focus on the upper echelon of this group, around 700 funds. Most estimates calculate that this group of people orchestrate bulk of the hedge fund industry’s total asset base, and by observing their first-class picks, Insider Monkey has discovered many investment strategies that have historically outrun the broader indices. Insider Monkey’s flagship hedge fund strategy beat the S&P 500 index by 6 percentage points per year since its inception in May 2014 through early November 2018. We were able to generate large returns even by identifying short candidates. Our portfolio of short stocks lost 24% since February 2017 (through December 3rd) even though the market was up nearly 23% during the same period. We just shared a list of 11 short targets in our latest quarterly update.

What have hedge funds been doing with The York Water Company (NASDAQ:YORW)? 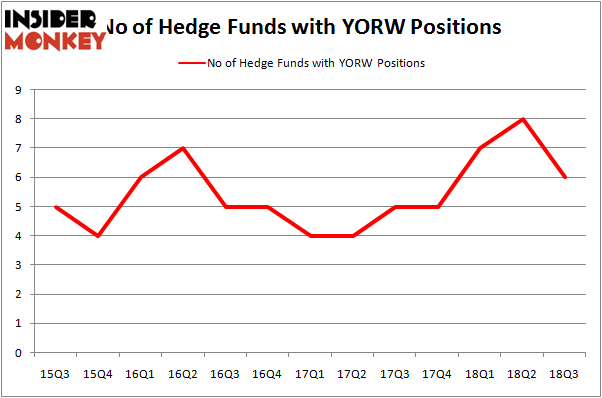 Among these funds, Renaissance Technologies held the most valuable stake in The York Water Company (NASDAQ:YORW), which was worth $7.2 million at the end of the third quarter. On the second spot was Royce & Associates which amassed $4.3 million worth of shares. Moreover, GAMCO Investors, Millennium Management, and Citadel Investment Group were also bullish on The York Water Company (NASDAQ:YORW), allocating a large percentage of their portfolios to this stock.

Since The York Water Company (NASDAQ:YORW) has witnessed bearish sentiment from the entirety of the hedge funds we track, it’s safe to say that there were a few hedgies who were dropping their entire stakes last quarter. It’s worth mentioning that Peter Muller’s PDT Partners dropped the largest position of the 700 funds watched by Insider Monkey, totaling an estimated $0.3 million in stock. Matthew Hulsizer’s fund, PEAK6 Capital Management, also said goodbye to its stock, about $0.1 million worth. These moves are interesting, as total hedge fund interest dropped by 2 funds last quarter.

As you can see these stocks had an average of 10.5 hedge funds with bullish positions and the average amount invested in these stocks was $64 million. That figure was $14 million in YORW’s case. New Frontier Corp (NYSE:NFC) is the most popular stock in this table. On the other hand Bridgewater Bancshares, Inc. (NASDAQ:BWB) is the least popular one with only 7 bullish hedge fund positions. Compared to these stocks The York Water Company (NASDAQ:YORW) is even less popular than BWB. Considering that hedge funds aren’t fond of this stock in relation to other companies analyzed in this article, it may be a good idea to analyze it in detail and understand why the smart money isn’t behind this stock. This isn’t necessarily bad news. Although it is possible that hedge funds may think the stock is overpriced and view the stock as a short candidate, they may not be very familiar with the bullish thesis. In either case more research is warranted.