Hedge Funds and other institutional investors have just completed filing their 13Fs with the Securities and Exchange Commission, revealing their equity portfolios as of the end of December. At Insider Monkey, we follow nearly 750 active hedge funds and notable investors and by analyzing their 13F filings, we can determine the stocks that they are collectively bullish on. One of their picks is The Simply Good Foods Company (NASDAQ:SMPL), so let’s take a closer look at the sentiment that surrounds it in the current quarter.

Is The Simply Good Foods Company (NASDAQ:SMPL) a buy right now? The smart money is betting on the stock. The number of long hedge fund positions inched up by 2 lately. Our calculations also showed that SMPL isn’t among the 30 most popular stocks among hedge funds. SMPL was in 25 hedge funds’ portfolios at the end of the fourth quarter of 2018. There were 23 hedge funds in our database with SMPL holdings at the end of the previous quarter.

What have hedge funds been doing with The Simply Good Foods Company (NASDAQ:SMPL)? 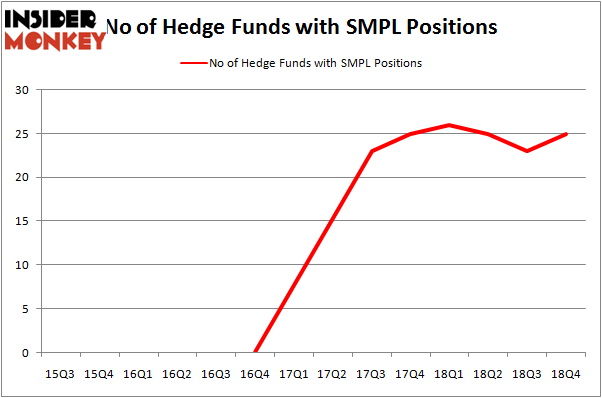 The largest stake in The Simply Good Foods Company (NASDAQ:SMPL) was held by Lomas Capital Management, which reported holding $36.2 million worth of stock at the end of December. It was followed by D E Shaw with a $30 million position. Other investors bullish on the company included Renaissance Technologies, Woodson Capital Management, and Millennium Management.

With a general bullishness amongst the heavyweights, key money managers were breaking ground themselves. Red Cedar Management, managed by Alexander Charles McAree, initiated the most valuable position in The Simply Good Foods Company (NASDAQ:SMPL). Red Cedar Management had $6.6 million invested in the company at the end of the quarter. Steve Cohen’s Point72 Asset Management also made a $2.6 million investment in the stock during the quarter. The following funds were also among the new SMPL investors: John A. Levin’s Levin Capital Strategies, Cliff Asness’s AQR Capital Management, and David Costen Haley’s HBK Investments.

Let’s check out hedge fund activity in other stocks – not necessarily in the same industry as The Simply Good Foods Company (NASDAQ:SMPL) but similarly valued. We will take a look at Tower Semiconductor Ltd. (NASDAQ:TSEM), Corcept Therapeutics Incorporated (NASDAQ:CORT), CVR Refining LP (NYSE:CVRR), and Acacia Communications, Inc. (NASDAQ:ACIA). This group of stocks’ market values are closest to SMPL’s market value.

As you can see these stocks had an average of 15.5 hedge funds with bullish positions and the average amount invested in these stocks was $149 million. That figure was $184 million in SMPL’s case. Acacia Communications, Inc. (NASDAQ:ACIA) is the most popular stock in this table. On the other hand CVR Refining LP (NYSE:CVRR) is the least popular one with only 7 bullish hedge fund positions. Compared to these stocks The Simply Good Foods Company (NASDAQ:SMPL) is more popular among hedge funds. Our calculations showed that top 15 most popular stocks) among hedge funds returned 24.2% through April 22nd and outperformed the S&P 500 ETF (SPY) by more than 7 percentage points. Hedge funds were also right about betting on SMPL, though not to the same extent, as the stock returned 19.9% and outperformed the market as well.