Here’s What Hedge Funds Think About The Marcus Corporation (MCS)

While the market driven by short-term sentiment influenced by uncertainty regarding the future of the interest rate environment in the US, declining oil prices and the trade war with China, many smart money investors kept their optimism regarding the current bull run in the fourth quarter, while still hedging many of their long positions. However, as we know, big investors usually buy stocks with strong fundamentals, which is why we believe we can profit from imitating them. In this article, we are going to take a look at the smart money sentiment surrounding The Marcus Corporation (NYSE:MCS).

The Marcus Corporation (NYSE:MCS) has seen a decrease in hedge fund sentiment in recent months. MCS was in 11 hedge funds’ portfolios at the end of December. There were 13 hedge funds in our database with MCS positions at the end of the previous quarter. Our calculations also showed that MCS isn’t among the 30 most popular stocks among hedge funds.

Let’s take a look at the fresh hedge fund action regarding The Marcus Corporation (NYSE:MCS).

How have hedgies been trading The Marcus Corporation (NYSE:MCS)?

At Q4’s end, a total of 11 of the hedge funds tracked by Insider Monkey were long this stock, a change of -15% from the second quarter of 2018. The graph below displays the number of hedge funds with bullish position in MCS over the last 14 quarters. With hedge funds’ capital changing hands, there exists a select group of notable hedge fund managers who were boosting their holdings meaningfully (or already accumulated large positions). 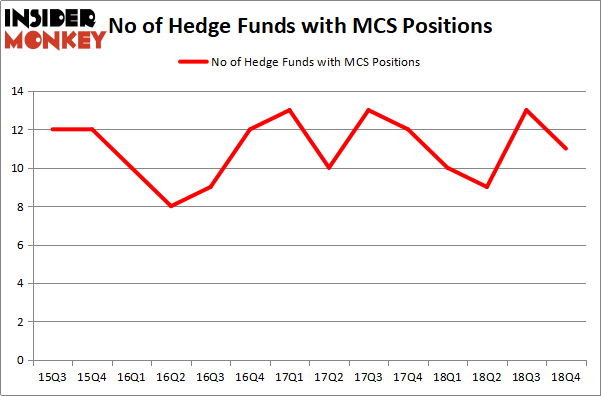 When looking at the institutional investors followed by Insider Monkey, GAMCO Investors, managed by Mario Gabelli, holds the largest position in The Marcus Corporation (NYSE:MCS). GAMCO Investors has a $37.2 million position in the stock, comprising 0.3% of its 13F portfolio. Coming in second is Renaissance Technologies, led by Jim Simons, holding a $17.7 million position; the fund has less than 0.1%% of its 13F portfolio invested in the stock. Other professional money managers that hold long positions contain Noam Gottesman’s GLG Partners, Peter Rathjens, Bruce Clarke and John Campbell’s Arrowstreet Capital and John Overdeck and David Siegel’s Two Sigma Advisors.

Since The Marcus Corporation (NYSE:MCS) has experienced bearish sentiment from hedge fund managers, logic holds that there exists a select few fund managers that decided to sell off their full holdings by the end of the third quarter. Intriguingly, Israel Englander’s Millennium Management said goodbye to the largest stake of the 700 funds monitored by Insider Monkey, valued at an estimated $5.6 million in stock, and Charles Paquelet’s Skylands Capital was right behind this move, as the fund dumped about $0.8 million worth. These bearish behaviors are interesting, as total hedge fund interest was cut by 2 funds by the end of the third quarter.

As you can see these stocks had an average of 15 hedge funds with bullish positions and the average amount invested in these stocks was $141 million. That figure was $71 million in MCS’s case. Talend S.A. (NASDAQ:TLND) is the most popular stock in this table. On the other hand Southside Bancshares, Inc. (NASDAQ:SBSI) is the least popular one with only 6 bullish hedge fund positions. The Marcus Corporation (NYSE:MCS) is not the least popular stock in this group but hedge fund interest is still below average. This is a slightly negative signal and we’d rather spend our time researching stocks that hedge funds are piling on. Our calculations showed that top 15 most popular stocks) among hedge funds returned 24.2% through April 22nd and outperformed the S&P 500 ETF (SPY) by more than 7 percentage points. Unfortunately MCS wasn’t nearly as popular as these 15 stock (hedge fund sentiment was quite bearish); MCS investors were disappointed as the stock returned -0.8% and underperformed the market. If you are interested in investing in large cap stocks with huge upside potential, you should check out the top 15 most popular stocks) among hedge funds as 13 of these stocks already outperformed the market this year.