Star Bulk Carriers Corp. (NASDAQ:SBLK) investors should pay attention to a decrease in hedge fund interest in recent months. SBLK was in 11 hedge funds’ portfolios at the end of June. There were 15 hedge funds in our database with SBLK holdings at the end of the previous quarter. Our calculations also showed that SBLK isn’t among the 30 most popular stocks among hedge funds (see the video below).

To the average investor there are a multitude of gauges stock market investors can use to grade stocks. A pair of the most innovative gauges are hedge fund and insider trading interest. Our researchers have shown that, historically, those who follow the best picks of the elite money managers can beat the S&P 500 by a very impressive margin (see the details here).

At the end of the second quarter, a total of 11 of the hedge funds tracked by Insider Monkey were bullish on this stock, a change of -27% from the previous quarter. Below, you can check out the change in hedge fund sentiment towards SBLK over the last 16 quarters. With the smart money’s sentiment swirling, there exists a select group of key hedge fund managers who were adding to their holdings meaningfully (or already accumulated large positions). 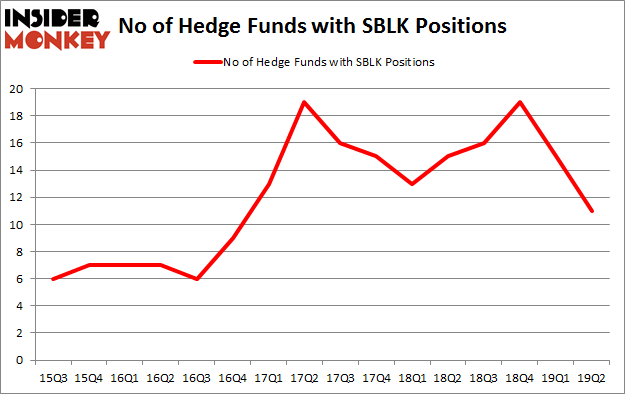 When looking at the institutional investors followed by Insider Monkey, Howard Marks’s Oaktree Capital Management has the most valuable position in Star Bulk Carriers Corp. (NASDAQ:SBLK), worth close to $361 million, comprising 6.8% of its total 13F portfolio. Sitting at the No. 2 spot is Robert Bishop of Impala Asset Management, with a $36.8 million position; the fund has 1.7% of its 13F portfolio invested in the stock. Some other hedge funds and institutional investors that are bullish encompass James Dinan’s York Capital Management, Renaissance Technologies and Paul Marshall and Ian Wace’s Marshall Wace LLP.

Since Star Bulk Carriers Corp. (NASDAQ:SBLK) has faced declining sentiment from the aggregate hedge fund industry, logic holds that there was a specific group of money managers that decided to sell off their full holdings in the second quarter. Intriguingly, Peter Rathjens, Bruce Clarke and John Campbell’s Arrowstreet Capital sold off the largest investment of the “upper crust” of funds followed by Insider Monkey, comprising an estimated $2.4 million in stock. Minhua Zhang’s fund, Weld Capital Management, also cut its stock, about $0.2 million worth. These transactions are intriguing to say the least, as total hedge fund interest dropped by 4 funds in the second quarter.

As you can see these stocks had an average of 8 hedge funds with bullish positions and the average amount invested in these stocks was $46 million. That figure was $449 million in SBLK’s case. Qiwi PLC (NASDAQ:QIWI) is the most popular stock in this table. On the other hand CNX Midstream Partners LP (NYSE:CNXM) is the least popular one with only 5 bullish hedge fund positions. Star Bulk Carriers Corp. (NASDAQ:SBLK) is not the most popular stock in this group but hedge fund interest is still above average. Our calculations showed that top 20 most popular stocks among hedge funds returned 24.4% in 2019 through September 30th and outperformed the S&P 500 ETF (SPY) by 4 percentage points. Hedge funds were also right about betting on SBLK, though not to the same extent, as the stock returned 4.4% during the third quarter and outperformed the market as well.