Insider Monkey has processed numerous 13F filings of hedge funds and successful value investors to create an extensive database of hedge fund holdings. The 13F filings show the hedge funds’ and successful investors’ positions as of the end of the second quarter. You can find write-ups about an individual hedge fund’s trades on numerous financial news websites. However, in this article we will take a look at their collective moves and analyze what the smart money thinks of SPS Commerce, Inc. (NASDAQ:SPSC) based on that data.

SPS Commerce, Inc. (NASDAQ:SPSC) has seen a decrease in hedge fund sentiment in recent months. SPSC was in 18 hedge funds’ portfolios at the end of June. There were 19 hedge funds in our database with SPSC holdings at the end of the previous quarter. Our calculations also showed that SPSC isn’t among the 30 most popular stocks among hedge funds (see the video below). 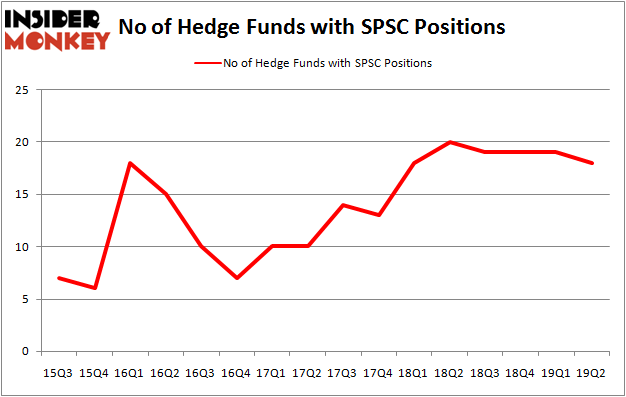 At Q2’s end, a total of 18 of the hedge funds tracked by Insider Monkey held long positions in this stock, a change of -5% from one quarter earlier. Below, you can check out the change in hedge fund sentiment towards SPSC over the last 16 quarters. With hedgies’ positions undergoing their usual ebb and flow, there exists a select group of noteworthy hedge fund managers who were adding to their stakes considerably (or already accumulated large positions).

More specifically, Renaissance Technologies was the largest shareholder of SPS Commerce, Inc. (NASDAQ:SPSC), with a stake worth $43.8 million reported as of the end of March. Trailing Renaissance Technologies was Arrowstreet Capital, which amassed a stake valued at $18.4 million. D E Shaw, GLG Partners, and AQR Capital Management were also very fond of the stock, giving the stock large weights in their portfolios.

Judging by the fact that SPS Commerce, Inc. (NASDAQ:SPSC) has experienced a decline in interest from the smart money, we can see that there exists a select few funds that elected to cut their entire stakes by the end of the second quarter. At the top of the heap, Richard Driehaus’s Driehaus Capital cut the largest position of all the hedgies followed by Insider Monkey, comprising an estimated $1.7 million in call options, and D. E. Shaw’s D E Shaw was right behind this move, as the fund cut about $1.6 million worth. These moves are intriguing to say the least, as aggregate hedge fund interest dropped by 1 funds by the end of the second quarter.

As you can see these stocks had an average of 14.25 hedge funds with bullish positions and the average amount invested in these stocks was $128 million. That figure was $171 million in SPSC’s case. Golar LNG Limited (NASDAQ:GLNG) is the most popular stock in this table. On the other hand BancFirst Corporation (NASDAQ:BANF) is the least popular one with only 9 bullish hedge fund positions. SPS Commerce, Inc. (NASDAQ:SPSC) is not the most popular stock in this group but hedge fund interest is still above average. This is a slightly positive signal but we’d rather spend our time researching stocks that hedge funds are piling on. Our calculations showed that top 20 most popular stocks among hedge funds returned 24.4% in 2019 through September 30th and outperformed the S&P 500 ETF (SPY) by 4 percentage points. Unfortunately SPSC wasn’t nearly as popular as these 20 stocks and hedge funds that were betting on SPSC were disappointed as the stock returned -7.9% during the third quarter and underperformed the market. If you are interested in investing in large cap stocks with huge upside potential, you should check out the top 20 most popular stocks among hedge funds as many of these stocks already outperformed the market so far this year.