Here’s What Hedge Funds Think About Spirit Airlines Incorporated (SAVE)

Hedge Funds and other institutional investors have just completed filing their 13Fs with the Securities and Exchange Commission, revealing their equity portfolios as of the end of December. At Insider Monkey, we follow nearly 750 active hedge funds and notable investors and by analyzing their 13F filings, we can determine the stocks that they are collectively bullish on. One of their picks is Spirit Airlines Incorporated (NYSE:SAVE), so let’s take a closer look at the sentiment that surrounds it in the current quarter.

Is Spirit Airlines Incorporated (NYSE:SAVE) a buy here? The best stock pickers are buying. The number of bullish hedge fund positions inched up by 10 recently. Our calculations also showed that SAVE isn’t among the 30 most popular stocks among hedge funds. SAVE was in 30 hedge funds’ portfolios at the end of the fourth quarter of 2018. There were 20 hedge funds in our database with SAVE positions at the end of the previous quarter.

Heading into the first quarter of 2019, a total of 30 of the hedge funds tracked by Insider Monkey held long positions in this stock, a change of 50% from the second quarter of 2018. The graph below displays the number of hedge funds with bullish position in SAVE over the last 14 quarters. With hedgies’ sentiment swirling, there exists a select group of noteworthy hedge fund managers who were boosting their stakes considerably (or already accumulated large positions). 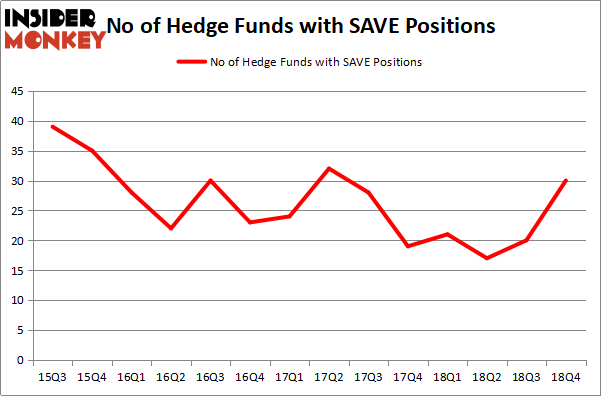 More specifically, Citadel Investment Group was the largest shareholder of Spirit Airlines Incorporated (NYSE:SAVE), with a stake worth $97.1 million reported as of the end of September. Trailing Citadel Investment Group was Interval Partners, which amassed a stake valued at $58 million. Polar Capital, Ashler Capital, and Columbus Circle Investors were also very fond of the stock, giving the stock large weights in their portfolios.