Insider Monkey has processed numerous 13F filings of hedge funds and famous investors to create an extensive database of hedge fund holdings. The 13F filings show the hedge funds’ and investors’ positions as of the end of the fourth quarter. You can find write-ups about an individual hedge fund’s trades on numerous financial news websites. However, in this article we will take a look at their collective moves and analyze what the smart money thinks of Spire Inc. (NYSE:SR) based on that data.

Is Spire Inc. (NYSE:SR) going to take off soon? Money managers are reducing their bets on the stock. The number of long hedge fund positions retreated by 2 in recent months. Our calculations also showed that SR isn’t among the 30 most popular stocks among hedge funds. SR was in 13 hedge funds’ portfolios at the end of the fourth quarter of 2018. There were 15 hedge funds in our database with SR positions at the end of the previous quarter.

At the end of the fourth quarter, a total of 13 of the hedge funds tracked by Insider Monkey were bullish on this stock, a change of -13% from one quarter earlier. Below, you can check out the change in hedge fund sentiment towards SR over the last 14 quarters. With the smart money’s capital changing hands, there exists a few key hedge fund managers who were increasing their holdings substantially (or already accumulated large positions). 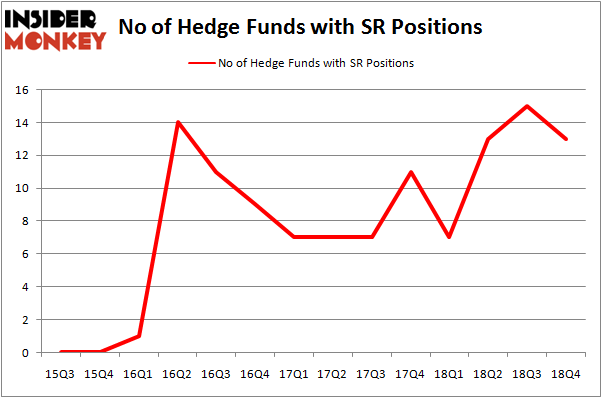 More specifically, Renaissance Technologies was the largest shareholder of Spire Inc. (NYSE:SR), with a stake worth $70.1 million reported as of the end of September. Trailing Renaissance Technologies was Shelter Harbor Advisors, which amassed a stake valued at $5.9 million. Arrowstreet Capital, GLG Partners, and Citadel Investment Group were also very fond of the stock, giving the stock large weights in their portfolios.

Due to the fact that Spire Inc. (NYSE:SR) has faced a decline in interest from the entirety of the hedge funds we track, it’s safe to say that there were a few money managers who were dropping their positions entirely by the end of the third quarter. It’s worth mentioning that Brian Olson, Baehyun Sung, and Jamie Waters’s Blackstart Capital sold off the biggest stake of the 700 funds followed by Insider Monkey, worth close to $13.3 million in stock. Israel Englander’s fund, Millennium Management, also said goodbye to its stock, about $6.4 million worth. These bearish behaviors are intriguing to say the least, as total hedge fund interest dropped by 2 funds by the end of the third quarter.

As you can see these stocks had an average of 25.75 hedge funds with bullish positions and the average amount invested in these stocks was $473 million. That figure was $91 million in SR’s case. Coupa Software Incorporated (NASDAQ:COUP) is the most popular stock in this table. On the other hand Methanex Corporation (NASDAQ:MEOH) is the least popular one with only 21 bullish hedge fund positions. Compared to these stocks Spire Inc. (NYSE:SR) is even less popular than MEOH. Hedge funds dodged a bullet by taking a bearish stance towards SR. Our calculations showed that the top 15 most popular hedge fund stocks returned 24.2% through April 22nd and outperformed the S&P 500 ETF (SPY) by more than 7 percentage points. Unfortunately SR wasn’t nearly as popular as these 15 stock (hedge fund sentiment was very bearish); SR investors were disappointed as the stock returned 10% and underperformed the market. If you are interested in investing in large cap stocks with huge upside potential, you should check out the top 15 most popular stocks) among hedge funds as 13 of these stocks already outperformed the market this year.