We are still in an overall bull market and many stocks that smart money investors were piling into surged through October 17th. Among them, Facebook and Microsoft ranked among the top 3 picks and these stocks gained 45% and 39% respectively. Hedge funds’ top 3 stock picks returned 34.4% this year and beat the S&P 500 ETFs by 13 percentage points. Investing in index funds guarantees you average returns, not superior returns. We are looking to generate superior returns for our readers. That’s why we believe it isn’t a waste of time to check out hedge fund sentiment before you invest in a stock like Southwestern Energy Company (NYSE:SWN).

Is Southwestern Energy Company (NYSE:SWN) the right investment to pursue these days? Money managers are taking a pessimistic view. The number of bullish hedge fund bets fell by 6 lately. Our calculations also showed that SWN isn’t among the 30 most popular stocks among hedge funds (see the video below). SWN was in 18 hedge funds’ portfolios at the end of June. There were 24 hedge funds in our database with SWN holdings at the end of the previous quarter.

In the eyes of most shareholders, hedge funds are seen as unimportant, old investment vehicles of the past. While there are more than 8000 funds trading today, Our researchers choose to focus on the upper echelon of this group, around 750 funds. It is estimated that this group of investors command the majority of the smart money’s total asset base, and by watching their best picks, Insider Monkey has determined various investment strategies that have historically outperformed the market. Insider Monkey’s flagship hedge fund strategy outstripped the S&P 500 index by around 5 percentage points a year since its inception in May 2014. We were able to generate large returns even by identifying short candidates. Our portfolio of short stocks lost 25.7% since February 2017 (through September 30th) even though the market was up more than 33% during the same period. We just shared a list of 10 short targets in our latest quarterly update . 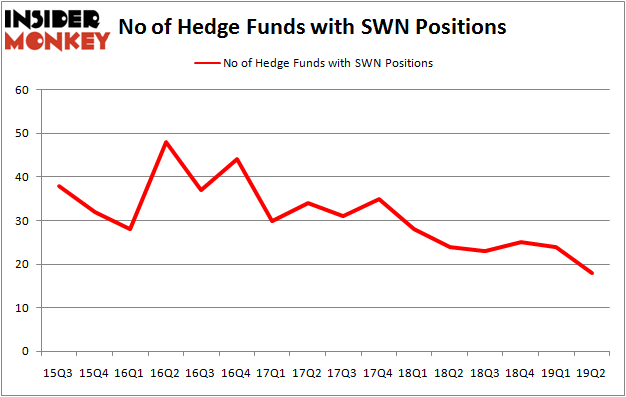 What does smart money think about Southwestern Energy Company (NYSE:SWN)?

At the end of the second quarter, a total of 18 of the hedge funds tracked by Insider Monkey held long positions in this stock, a change of -25% from the previous quarter. The graph below displays the number of hedge funds with bullish position in SWN over the last 16 quarters. So, let’s check out which hedge funds were among the top holders of the stock and which hedge funds were making big moves.

Of the funds tracked by Insider Monkey, AQR Capital Management, managed by Cliff Asness, holds the most valuable position in Southwestern Energy Company (NYSE:SWN). AQR Capital Management has a $115.2 million position in the stock, comprising 0.1% of its 13F portfolio. Coming in second is Bridgewater Associates, managed by Ray Dalio, which holds a $49 million position; the fund has 0.4% of its 13F portfolio invested in the stock. Remaining hedge funds and institutional investors with similar optimism include Israel Englander’s Millennium Management, Peter Rathjens, Bruce Clarke and John Campbell’s Arrowstreet Capital and Ken Fisher’s Fisher Asset Management.

Seeing as Southwestern Energy Company (NYSE:SWN) has experienced a decline in interest from the smart money, logic holds that there was a specific group of hedge funds that slashed their full holdings last quarter. Intriguingly, Stanley Druckenmiller’s Duquesne Capital dumped the largest position of the 750 funds watched by Insider Monkey, comprising close to $10.6 million in stock. Sara Nainzadeh’s fund, Centenus Global Management, also cut its stock, about $1.6 million worth. These bearish behaviors are interesting, as aggregate hedge fund interest fell by 6 funds last quarter.

As you can see these stocks had an average of 21 hedge funds with bullish positions and the average amount invested in these stocks was $317 million. That figure was $257 million in SWN’s case. Range Resources Corp. (NYSE:RRC) is the most popular stock in this table. On the other hand Chesapeake Utilities Corporation (NYSE:CPK) is the least popular one with only 9 bullish hedge fund positions. Southwestern Energy Company (NYSE:SWN) is not the least popular stock in this group but hedge fund interest is still below average. This is a slightly negative signal and we’d rather spend our time researching stocks that hedge funds are piling on. Our calculations showed that top 20 most popular stocks among hedge funds returned 24.4% in 2019 through September 30th and outperformed the S&P 500 ETF (SPY) by 4 percentage points. Unfortunately SWN wasn’t nearly as popular as these 20 stocks (hedge fund sentiment was quite bearish); SWN investors were disappointed as the stock returned -38.9% during the third quarter and underperformed the market. If you are interested in investing in large cap stocks with huge upside potential, you should check out the top 20 most popular stocks among hedge funds as many of these stocks already outperformed the market so far in 2019.