PPG Industries, Inc. (NYSE:PPG) has seen an increase in hedge fund interest lately. Our calculations also showed that PPG isn’t among the 30 most popular stocks among hedge funds.

In today’s marketplace there are numerous gauges stock traders have at their disposal to grade publicly traded companies. Some of the less known gauges are hedge fund and insider trading moves. Our researchers have shown that, historically, those who follow the top picks of the top investment managers can trounce the market by a very impressive amount (see the details here). 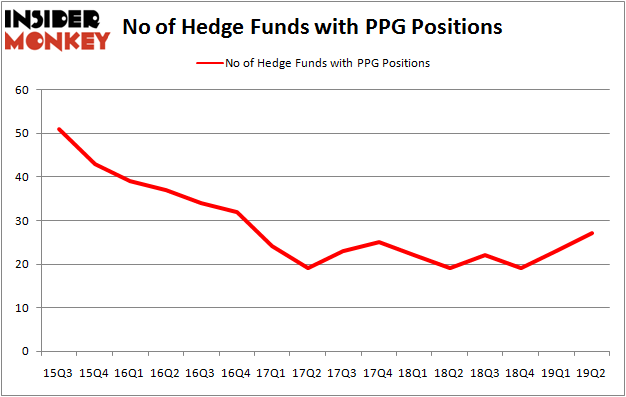 Unlike some fund managers who are betting on Dow reaching 40000 in a year, our long-short investment strategy doesn’t rely on bull markets to deliver double digit returns. We only rely on hedge fund buy/sell signals. Let’s take a look at the recent hedge fund action regarding PPG Industries, Inc. (NYSE:PPG).

What have hedge funds been doing with PPG Industries, Inc. (NYSE:PPG)?

More specifically, Trian Partners was the largest shareholder of PPG Industries, Inc. (NYSE:PPG), with a stake worth $493.1 million reported as of the end of March. Trailing Trian Partners was Citadel Investment Group, which amassed a stake valued at $312.3 million. Renaissance Technologies, Two Sigma Advisors, and AQR Capital Management were also very fond of the stock, giving the stock large weights in their portfolios.

Now, key hedge funds were breaking ground themselves. Point72 Asset Management, managed by Steve Cohen, assembled the most outsized position in PPG Industries, Inc. (NYSE:PPG). Point72 Asset Management had $6.1 million invested in the company at the end of the quarter. Ray Dalio’s Bridgewater Associates also made a $3 million investment in the stock during the quarter. The other funds with brand new PPG positions are David Harding’s Winton Capital Management, Matthew Hulsizer’s PEAK6 Capital Management, and Javier Velazquez’s Albar Capital.

As you can see these stocks had an average of 31.25 hedge funds with bullish positions and the average amount invested in these stocks was $976 million. That figure was $930 million in PPG’s case. Twitter Inc (NYSE:TWTR) is the most popular stock in this table. On the other hand TD Ameritrade Holding Corp. (NASDAQ:AMTD) is the least popular one with only 22 bullish hedge fund positions. PPG Industries, Inc. (NYSE:PPG) is not the least popular stock in this group but hedge fund interest is still below average. Our calculations showed that top 20 most popular stocks among hedge funds returned 24.4% in 2019 through September 30th and outperformed the S&P 500 ETF (SPY) by 4 percentage points. A small number of hedge funds were also right about betting on PPG, though not to the same extent, as the stock returned 2% during the third quarter and outperformed the market.