Is Pan American Silver Corp. (NASDAQ:PAAS) a good stock to buy right now? We at Insider Monkey like to examine what billionaires and hedge funds think of a company before doing days of research on it. Given their 2 and 20 payment structure, hedge funds have more incentives and resources than the average investor. The funds have access to expert networks and get tips from industry insiders. They also have numerous Ivy League graduates and MBAs. Like everyone else, hedge funds perform miserably at times, but their consensus picks have historically outperformed the market after risk adjustments.

Pan American Silver Corp. (NASDAQ:PAAS) shares haven’t seen a lot of action during the third quarter. Overall, hedge fund sentiment was unchanged. The stock was in 15 hedge funds’ portfolios at the end of the fourth quarter of 2018. At the end of this article we will also compare PAAS to other stocks including BlackLine, Inc. (NASDAQ:BL), Fox Factory Holding Corp (NASDAQ:FOXF), and Simmons First National Corporation (NASDAQ:SFNC) to get a better sense of its popularity.

If you’d ask most stock holders, hedge funds are viewed as underperforming, old financial tools of the past. While there are more than 8000 funds in operation today, Our researchers look at the top tier of this club, approximately 750 funds. These money managers preside over the majority of the hedge fund industry’s total asset base, and by observing their unrivaled investments, Insider Monkey has determined a few investment strategies that have historically beaten the market. Insider Monkey’s flagship hedge fund strategy outstripped the S&P 500 index by nearly 5 percentage points a year since its inception in May 2014 through early November 2018. We were able to generate large returns even by identifying short candidates. Our portfolio of short stocks lost 27.5% since February 2017 (through March 12th) even though the market was up nearly 25% during the same period. We just shared a list of 6 short targets in our latest quarterly update and they are already down an average of 6% in less than a month.

How have hedgies been trading Pan American Silver Corp. (NASDAQ:PAAS)? 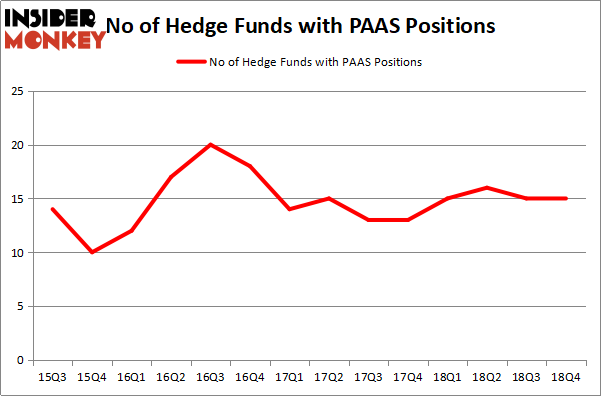 Among these funds, Renaissance Technologies held the most valuable stake in Pan American Silver Corp. (NASDAQ:PAAS), which was worth $101.6 million at the end of December. On the second spot was Highbridge Capital Management which amassed $13.3 million worth of shares. Moreover, Sprott Asset Management, Two Sigma Advisors, and Millennium Management were also bullish on Pan American Silver Corp. (NASDAQ:PAAS), allocating a large percentage of their portfolios to this stock.

Due to the fact that Pan American Silver Corp. (NASDAQ:PAAS) has experienced a decline in interest from the entirety of the hedge funds we track, logic holds that there were a few fund managers that decided to sell off their positions entirely in the third quarter. At the top of the heap, Dmitry Balyasny’s Balyasny Asset Management dumped the largest position of the 700 funds tracked by Insider Monkey, worth about $0.9 million in stock. Michael Platt and William Reeves’s fund, BlueCrest Capital Mgmt., also said goodbye to its stock, about $0.2 million worth. These bearish behaviors are important to note, as aggregate hedge fund interest stayed the same (this is a bearish signal in our experience).