The Insider Monkey team has completed processing the quarterly 13F filings for the March quarter submitted by the hedge funds and other money managers included in our extensive database. Most hedge fund investors experienced strong gains on the back of a strong market performance, which certainly propelled them to adjust their equity holdings so as to maintain the desired risk profile. As a result, the relevancy of these public filings and their content is indisputable, as they may reveal numerous high-potential stocks. The following article will discuss the smart money sentiment towards Oshkosh Corporation (NYSE:OSK).

Is Oshkosh Corporation (NYSE:OSK) going to take off soon? The smart money is taking a pessimistic view. The number of bullish hedge fund bets were cut by 5 lately. Our calculations also showed that osk isn’t among the 30 most popular stocks among hedge funds. OSK was in 24 hedge funds’ portfolios at the end of the first quarter of 2019. There were 29 hedge funds in our database with OSK positions at the end of the previous quarter.

At the end of the first quarter, a total of 24 of the hedge funds tracked by Insider Monkey were bullish on this stock, a change of -17% from one quarter earlier. By comparison, 26 hedge funds held shares or bullish call options in OSK a year ago. With hedge funds’ sentiment swirling, there exists a select group of notable hedge fund managers who were increasing their stakes substantially (or already accumulated large positions). 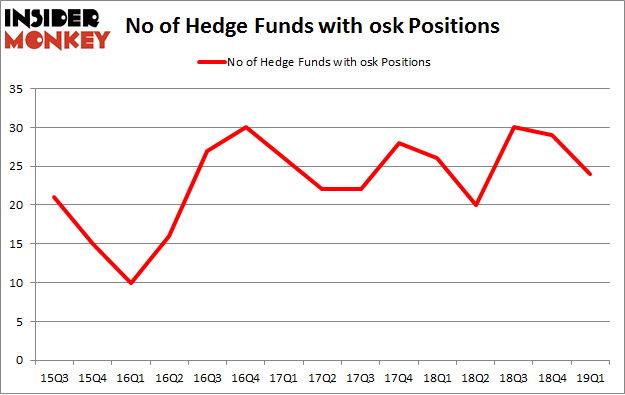 More specifically, AQR Capital Management was the largest shareholder of Oshkosh Corporation (NYSE:OSK), with a stake worth $101.6 million reported as of the end of March. Trailing AQR Capital Management was Two Sigma Advisors, which amassed a stake valued at $43.7 million. Atlantic Investment Management, Citadel Investment Group, and Lodge Hill Capital were also very fond of the stock, giving the stock large weights in their portfolios.

Seeing as Oshkosh Corporation (NYSE:OSK) has faced bearish sentiment from the aggregate hedge fund industry, it’s safe to say that there were a few hedgies that decided to sell off their positions entirely heading into Q3. It’s worth mentioning that Robert Polak’s Anchor Bolt Capital dumped the biggest investment of the “upper crust” of funds tracked by Insider Monkey, comprising close to $32.2 million in stock, and Andrew Feldstein and Stephen Siderow’s Blue Mountain Capital was right behind this move, as the fund dropped about $10 million worth. These moves are interesting, as aggregate hedge fund interest fell by 5 funds heading into Q3.

As you can see these stocks had an average of 19.25 hedge funds with bullish positions and the average amount invested in these stocks was $234 million. That figure was $354 million in OSK’s case. Huntsman Corporation (NYSE:HUN) is the most popular stock in this table. On the other hand Buckeye Partners, L.P. (NYSE:BPL) is the least popular one with only 5 bullish hedge fund positions. Oshkosh Corporation (NYSE:OSK) is not the most popular stock in this group but hedge fund interest is still above average. Our calculations showed that top 20 most popular stocks among hedge funds returned 1.9% in Q2 through May 30th and outperformed the S&P 500 ETF (SPY) by more than 3 percentage points. Hedge funds were also right about betting on OSK, though not to the same extent, as the stock returned 0.4% during the same time frame and outperformed the market as well.