Did Hedge Funds Drop The Ball On Oshkosh Corporation (OSK) ?

Hedge funds and large money managers usually invest with a focus on the long-term horizon and, therefore, short-lived dips on the charts, usually don’t make them change their opinion towards a company. This time it may be different. During the fourth quarter of 2018 we observed increased volatility and small-cap stocks underperformed the market. Hedge fund investor letters indicated that they are cutting their overall exposure, closing out some position and doubling down on others. Let’s take a look at the hedge fund sentiment towards Oshkosh Corporation (NYSE:OSK) to find out whether it was one of their high conviction long-term ideas.

Oshkosh Corporation (NYSE:OSK) has seen a decrease in hedge fund interest lately. Our calculations also showed that OSK isn’t among the 30 most popular stocks among hedge funds.

What have hedge funds been doing with Oshkosh Corporation (NYSE:OSK)?

Heading into the first quarter of 2019, a total of 29 of the hedge funds tracked by Insider Monkey held long positions in this stock, a change of -3% from the second quarter of 2018. On the other hand, there were a total of 26 hedge funds with a bullish position in OSK a year ago. With hedgies’ positions undergoing their usual ebb and flow, there exists an “upper tier” of key hedge fund managers who were upping their stakes significantly (or already accumulated large positions). 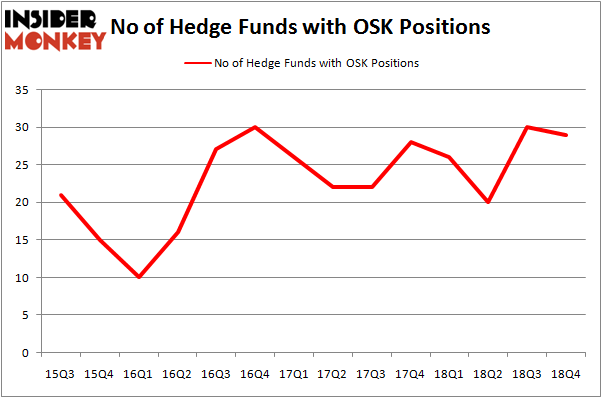 The largest stake in Oshkosh Corporation (NYSE:OSK) was held by AQR Capital Management, which reported holding $65.8 million worth of stock at the end of September. It was followed by Two Sigma Advisors with a $37 million position. Other investors bullish on the company included Anchor Bolt Capital, Atlantic Investment Management, and Lodge Hill Capital.

Because Oshkosh Corporation (NYSE:OSK) has experienced a decline in interest from the smart money, we can see that there was a specific group of hedge funds that slashed their full holdings by the end of the third quarter. At the top of the heap, Alexander Mitchell’s Scopus Asset Management dumped the biggest investment of all the hedgies tracked by Insider Monkey, valued at close to $0.7 million in stock, and Michael Platt and William Reeves’s BlueCrest Capital Mgmt. was right behind this move, as the fund cut about $0.4 million worth. These bearish behaviors are important to note, as total hedge fund interest dropped by 1 funds by the end of the third quarter.

As you can see these stocks had an average of 16 hedge funds with bullish positions and the average amount invested in these stocks was $271 million. That figure was $385 million in OSK’s case. Axis Capital Holdings Limited (NYSE:AXS) is the most popular stock in this table. On the other hand Semiconductor Manufacturing International Corporation (NYSE:SMI) is the least popular one with only 4 bullish hedge fund positions. Oshkosh Corporation (NYSE:OSK) is not the most popular stock in this group but hedge fund interest is still above average. Our calculations showed that top 15 most popular stocks) among hedge funds returned 24.2% through April 22nd and outperformed the S&P 500 ETF (SPY) by more than 7 percentage points. Hedge funds were also right about betting on OSK as the stock returned 33.8% and outperformed the market by an even larger margin. Hedge funds were rewarded for their relative bullishness.