Should You Buy Oshkosh Corporation (OSK)?

Out of thousands of stocks that are currently traded on the market, it is difficult to determine those that can really generate strong returns. Hedge funds and institutional investors spend millions of dollars on analysts with MBAs and PhDs, who are industry experts and well connected to other industry and media insiders on top of that. Individual investors can piggyback the hedge funds employing these talents and can benefit from their vast resources and knowledge in that way. We analyze quarterly 13F filings of over 700 hedge funds and, by looking at the smart money sentiment that surrounds a stock, we can determine whether it has potential to beat the market over the long-term. Therefore, let’s take a closer look at what smart money thinks about Oshkosh Corporation (NYSE:OSK).

Oshkosh Corporation (NYSE:OSK) shareholders have witnessed an increase in hedge fund sentiment of late. Our calculations also showed that OSK isn’t among the 30 most popular stocks among hedge funds.

Heading into the fourth quarter of 2018, a total of 30 of the hedge funds tracked by Insider Monkey were bullish on this stock, a change of 50% from one quarter earlier. By comparison, 28 hedge funds held shares or bullish call options in OSK heading into this year. With hedge funds’ capital changing hands, there exists a few key hedge fund managers who were increasing their holdings substantially (or already accumulated large positions). 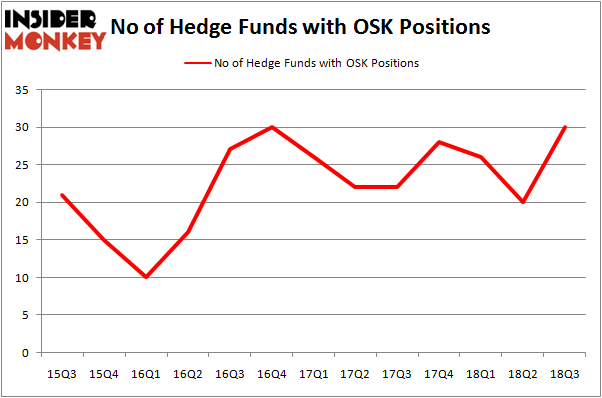 More specifically, AQR Capital Management was the largest shareholder of Oshkosh Corporation (NYSE:OSK), with a stake worth $155.2 million reported as of the end of September. Trailing AQR Capital Management was Millennium Management, which amassed a stake valued at $51.3 million. Citadel Investment Group, Anchor Bolt Capital, and Lodge Hill Capital were also very fond of the stock, giving the stock large weights in their portfolios.

As you can see these stocks had an average of 19.25 hedge funds with bullish positions and the average amount invested in these stocks was $580 million. That figure was $448 million in OSK’s case. Loxo Oncology Inc (NASDAQ:LOXO) is the most popular stock in this table. On the other hand Viper Energy Partners LP (NASDAQ:VNOM) is the least popular one with only 12 bullish hedge fund positions. Oshkosh Corporation (NYSE:OSK) is not the most popular stock in this group but hedge fund interest is still above average. This is a slightly positive signal but we’d rather spend our time researching stocks that hedge funds are piling on. In this regard LOXO might be a better candidate to consider a long position.

Should You Buy Match Group, Inc. (MTCH)?
Monthly Newsletter Strategy
Download a free copy of our newsletter and see the details inside!
Hedge Fund Resource Center
Related News
Is Oshkosh Corp (OSK) a Good Stock to Buy? What is Going on With These Falling Stocks? Do Hedge Funds Love Oshkosh Corporation (OSK)? Pentagon Insider: Oshkosh Wins Big With a $780 Million Defense Contract Pentagon Insider: Rockwell Collins Records a Big Win in a $856 Million Day at the Pentagon Inside the Pentagon: Guess Who Won $1.4 Billion in Defense Contracts Yesterday? Hyster-Yale Materials Handling Inc (HY): Hedge Funds Are Bearish and Insiders Are Undecided, What Should You Do? The 10 Best Islands to Visit in 2019 5 Most Socially Responsible Companies in America 5 Ways You Can Eliminate Credit Card Debt
Billionaire Hedge Funds