Is Meredith Corporation (NYSE:MDP) a good investment right now? We check hedge fund and billionaire investor sentiment before delving into hours of research. Hedge funds spend millions of dollars on Ivy League graduates, expert networks, and get tips from investment bankers and industry insiders. Sure they sometimes fail miserably but historically their consensus stock picks outperformed the market after adjusting for known risk factors.

Is Meredith Corporation (NYSE:MDP) ready to rally soon? Prominent investors are taking a bearish view. The number of bullish hedge fund bets went down by 5 lately. Our calculations also showed that MDP isn’t among the 30 most popular stocks among hedge funds. MDP was in 12 hedge funds’ portfolios at the end of December. There were 17 hedge funds in our database with MDP holdings at the end of the previous quarter.

At Q4’s end, a total of 12 of the hedge funds tracked by Insider Monkey were bullish on this stock, a change of -29% from the second quarter of 2018. By comparison, 15 hedge funds held shares or bullish call options in MDP a year ago. With hedge funds’ sentiment swirling, there exists a few key hedge fund managers who were increasing their holdings meaningfully (or already accumulated large positions). 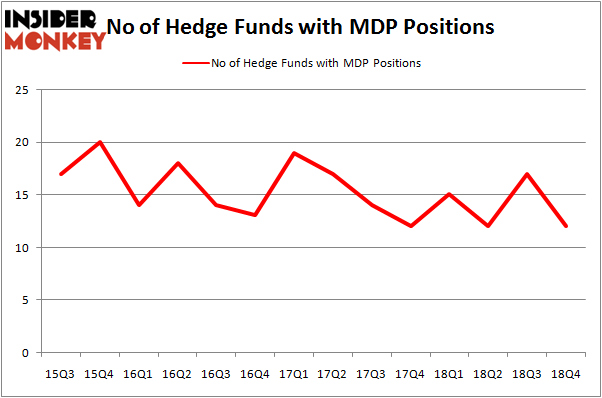 According to Insider Monkey’s hedge fund database, Royce & Associates, managed by Chuck Royce, holds the biggest position in Meredith Corporation (NYSE:MDP). Royce & Associates has a $122.5 million position in the stock, comprising 1.1% of its 13F portfolio. The second most bullish fund manager is John W. Rogers of Ariel Investments, with a $75.2 million position; 1% of its 13F portfolio is allocated to the stock. Other peers that are bullish comprise Robert Joseph Caruso’s Select Equity Group, Michael Price’s MFP Investors and Mario Gabelli’s GAMCO Investors.

Since Meredith Corporation (NYSE:MDP) has experienced bearish sentiment from the entirety of the hedge funds we track, logic holds that there lies a certain “tier” of hedgies that slashed their entire stakes last quarter. Interestingly, Ken Griffin’s Citadel Investment Group said goodbye to the biggest position of the 700 funds tracked by Insider Monkey, totaling close to $1.4 million in stock. D. E. Shaw’s fund, D E Shaw, also said goodbye to its stock, about $0.9 million worth. These transactions are important to note, as total hedge fund interest fell by 5 funds last quarter.

As you can see these stocks had an average of 24.75 hedge funds with bullish positions and the average amount invested in these stocks was $575 million. That figure was $312 million in MDP’s case. Boyd Gaming Corporation (NYSE:BYD) is the most popular stock in this table. On the other hand Genworth Financial Inc (NYSE:GNW) is the least popular one with only 22 bullish hedge fund positions. Compared to these stocks Meredith Corporation (NYSE:MDP) is even less popular than GNW. Hedge funds dodged a bullet by taking a bearish stance towards MDP. Our calculations showed that the top 15 most popular hedge fund stocks returned 24.2% through April 22nd and outperformed the S&P 500 ETF (SPY) by more than 7 percentage points. Unfortunately MDP wasn’t nearly as popular as these 15 stock (hedge fund sentiment was very bearish); MDP investors were disappointed as the stock returned 13.4% and underperformed the market. If you are interested in investing in large cap stocks with huge upside potential, you should check out the top 15 most popular stocks) among hedge funds as 13 of these stocks already outperformed the market this year.