Hedge fund interest in Mercantile Bank Corporation (NASDAQ:MBWM) shares was flat at the end of last quarter. This is usually a negative indicator. At the end of this article we will also compare MBWM to other stocks including Ennis, Inc. (NYSE:EBF), The First of Long Island Corporation (NASDAQ:FLIC), and Heritage Commerce Corp. (NASDAQ:HTBK) to get a better sense of its popularity. Our calculations also showed that MBWM isn’t among the 30 most popular stocks among hedge funds (see the video below).

Heading into the third quarter of 2019, a total of 7 of the hedge funds tracked by Insider Monkey were bullish on this stock, a change of 0% from the first quarter of 2019. Below, you can check out the change in hedge fund sentiment towards MBWM over the last 16 quarters. With hedgies’ positions undergoing their usual ebb and flow, there exists a few notable hedge fund managers who were upping their stakes substantially (or already accumulated large positions). 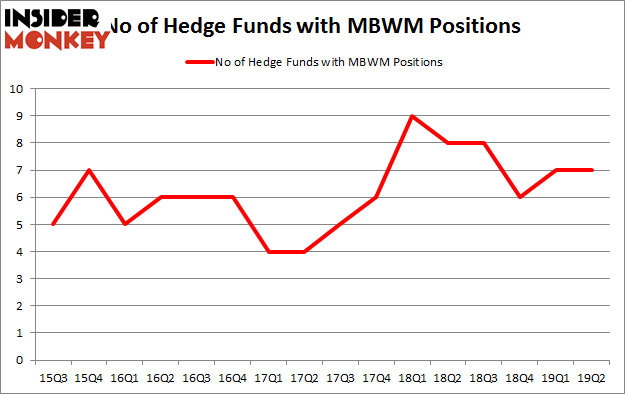 More specifically, Renaissance Technologies was the largest shareholder of Mercantile Bank Corporation (NASDAQ:MBWM), with a stake worth $25.9 million reported as of the end of March. Trailing Renaissance Technologies was Two Sigma Advisors, which amassed a stake valued at $0.6 million. Millennium Management, AQR Capital Management, and Winton Capital Management were also very fond of the stock, giving the stock large weights in their portfolios.

Judging by the fact that Mercantile Bank Corporation (NASDAQ:MBWM) has experienced falling interest from the entirety of the hedge funds we track, it’s safe to say that there lies a certain “tier” of funds who were dropping their entire stakes by the end of the second quarter. Intriguingly, Peter Algert and Kevin Coldiron’s Algert Coldiron Investors said goodbye to the largest position of the 750 funds watched by Insider Monkey, totaling about $0.3 million in stock. Gavin Saitowitz and Cisco J. del Valle’s fund, Springbok Capital, also dropped its stock, about $0 million worth. These moves are intriguing to say the least, as total hedge fund interest stayed the same (this is a bearish signal in our experience).

As you can see these stocks had an average of 8.5 hedge funds with bullish positions and the average amount invested in these stocks was $38 million. That figure was $28 million in MBWM’s case. Ennis, Inc. (NYSE:EBF) is the most popular stock in this table. On the other hand Marine Products Corporation (NYSE:MPX) is the least popular one with only 5 bullish hedge fund positions. Mercantile Bank Corporation (NASDAQ:MBWM) is not the least popular stock in this group but hedge fund interest is still below average. This is a slightly negative signal and we’d rather spend our time researching stocks that hedge funds are piling on. Our calculations showed that top 20 most popular stocks among hedge funds returned 24.4% in 2019 through September 30th and outperformed the S&P 500 ETF (SPY) by 4 percentage points. Unfortunately MBWM wasn’t nearly as popular as these 20 stocks (hedge fund sentiment was quite bearish); MBWM investors were disappointed as the stock returned 1.6% during the third quarter and underperformed the market. If you are interested in investing in large cap stocks with huge upside potential, you should check out the top 20 most popular stocks among hedge funds as many of these stocks already outperformed the market so far in 2019.