We at Insider Monkey have gone over 700 13F filings that hedge funds and prominent investors are required to file by the SEC. The 13F filings show the funds’ and investors’ portfolio positions as of December 31st. In this article we look at what those investors think of Macerich Company (NYSE:MAC).

Macerich Company (NYSE:MAC) has seen a decrease in enthusiasm from smart money lately. MAC was in 25 hedge funds’ portfolios at the end of December. There were 30 hedge funds in our database with MAC holdings at the end of the previous quarter. Our calculations also showed that MAC isn’t among the 30 most popular stocks among hedge funds.

Heading into the first quarter of 2019, a total of 25 of the hedge funds tracked by Insider Monkey were long this stock, a change of -17% from one quarter earlier. The graph below displays the number of hedge funds with bullish position in MAC over the last 14 quarters. With the smart money’s sentiment swirling, there exists an “upper tier” of notable hedge fund managers who were adding to their stakes considerably (or already accumulated large positions). 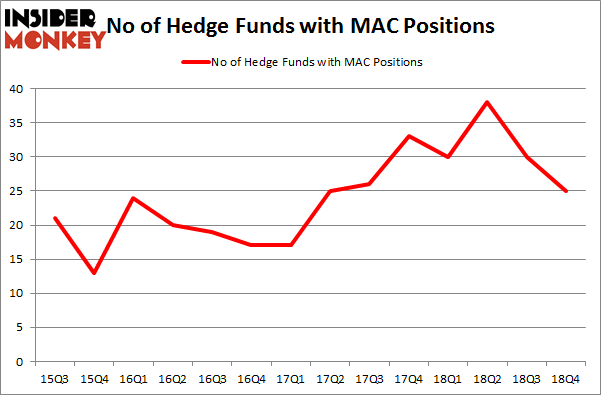 Judging by the fact that Macerich Company (NYSE:MAC) has faced falling interest from hedge fund managers, we can see that there exists a select few hedge funds who sold off their positions entirely in the third quarter. At the top of the heap, Joshua Nash’s Ulysses Management said goodbye to the largest investment of the “upper crust” of funds monitored by Insider Monkey, comprising an estimated $32.5 million in stock. John Khoury’s fund, Long Pond Capital, also dumped its stock, about $20.7 million worth. These moves are important to note, as total hedge fund interest fell by 5 funds in the third quarter.

As you can see these stocks had an average of 18 hedge funds with bullish positions and the average amount invested in these stocks was $197 million. That figure was $251 million in MAC’s case. Encompass Health Corporation (NYSE:EHC) is the most popular stock in this table. On the other hand Western Gas Equity Partners LP (NYSE:WGP) is the least popular one with only 7 bullish hedge fund positions. Macerich Company (NYSE:MAC) is not the most popular stock in this group but hedge fund interest is still above average. This is a slightly positive signal but we’d rather spend our time researching stocks that hedge funds are piling on. Our calculations showed that top 15 most popular stocks among hedge funds returned 21.3% through April 8th and outperformed the S&P 500 ETF (SPY) by more than 5 percentage points. Unfortunately MAC wasn’t in this group. Hedge funds that bet on MAC were disappointed as the stock returned 2.5% and underperformed the market. If you are interested in investing in large cap stocks, you should check out the top 15 hedge fund stocks as 12 of these outperformed the market.