During the fourth quarter the Russell 2000 ETF (IWM) lagged the larger S&P 500 ETF (SPY) by nearly 7 percentage points as investors worried over the possible ramifications of rising interest rates. The hedge funds and institutional investors we track typically invest more in smaller-cap stocks than an average investor (i.e. only 298 S&P 500 constituents were among the 500 most popular stocks among hedge funds), and we have seen data that shows those funds paring back their overall exposure. Those funds cutting positions in small-caps is one reason why volatility has increased. In the following paragraphs, we take a closer look at what hedge funds and prominent investors think of Iovance Biotherapeutics, Inc. (NASDAQ:IOVA) and see how the stock is affected by the recent hedge fund activity.

Iovance Biotherapeutics, Inc. (NASDAQ:IOVA) shareholders have witnessed a decrease in hedge fund interest recently. Our calculations also showed that iova isn’t among the 30 most popular stocks among hedge funds.

What does the smart money think about Iovance Biotherapeutics, Inc. (NASDAQ:IOVA)?

Heading into the first quarter of 2019, a total of 22 of the hedge funds tracked by Insider Monkey were long this stock, a change of -19% from one quarter earlier. By comparison, 18 hedge funds held shares or bullish call options in IOVA a year ago. With hedge funds’ capital changing hands, there exists an “upper tier” of key hedge fund managers who were adding to their stakes significantly (or already accumulated large positions). 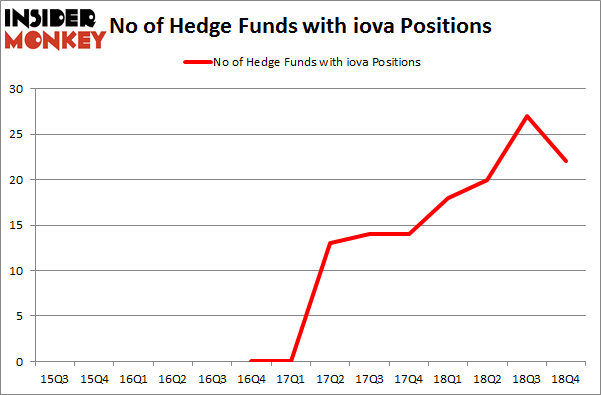 Among these funds, Perceptive Advisors held the most valuable stake in Iovance Biotherapeutics, Inc. (NASDAQ:IOVA), which was worth $108.3 million at the end of the fourth quarter. On the second spot was venBio Select Advisor which amassed $90.8 million worth of shares. Moreover, Broadfin Capital, Farallon Capital, and Great Point Partners were also bullish on Iovance Biotherapeutics, Inc. (NASDAQ:IOVA), allocating a large percentage of their portfolios to this stock.

Due to the fact that Iovance Biotherapeutics, Inc. (NASDAQ:IOVA) has witnessed bearish sentiment from the entirety of the hedge funds we track, it’s easy to see that there were a few fund managers that elected to cut their positions entirely heading into Q3. Interestingly, John Osterweis’s Osterweis Capital Management dumped the largest stake of all the hedgies watched by Insider Monkey, totaling about $5.1 million in stock. James A. Silverman’s fund, Opaleye Management, also dropped its stock, about $3.7 million worth. These moves are important to note, as total hedge fund interest fell by 5 funds heading into Q3.

As you can see these stocks had an average of 13.5 hedge funds with bullish positions and the average amount invested in these stocks was $84 million. That figure was $542 million in IOVA’s case. Editas Medicine, Inc. (NASDAQ:EDIT) is the most popular stock in this table. On the other hand Electronics For Imaging, Inc. (NASDAQ:EFII) is the least popular one with only 12 bullish hedge fund positions. Compared to these stocks Iovance Biotherapeutics, Inc. (NASDAQ:IOVA) is more popular among hedge funds. Our calculations showed that top 15 most popular stocks) among hedge funds returned 24.2% through April 22nd and outperformed the S&P 500 ETF (SPY) by more than 7 percentage points. Hedge funds were also right about betting on IOVA as the stock returned 24.9% and outperformed the market by an even larger margin. Hedge funds were clearly right about piling into this stock relative to other stocks with similar market capitalizations.