Before we spend countless hours researching a company, we like to analyze what insiders, hedge funds and billionaire investors think of the stock first. This is a necessary first step in our investment process because our research has shown that the elite investors’ consensus returns have been exceptional. In the following paragraphs, we find out what the billionaire investors and hedge funds think of Intuitive Surgical, Inc. (NASDAQ:ISRG).

Intuitive Surgical, Inc. (NASDAQ:ISRG) was in 41 hedge funds’ portfolios at the end of September. ISRG shareholders have witnessed an increase in activity from the world’s largest hedge funds lately. There were 37 hedge funds in our database with ISRG positions at the end of the previous quarter. Our calculations also showed that ISRG isn’t among the 30 most popular stocks among hedge funds (click for Q3 rankings and see the video below for Q2 rankings).

At the moment there are many methods stock traders employ to evaluate stocks. Two of the most useful methods are hedge fund and insider trading moves. Our researchers have shown that, historically, those who follow the best picks of the elite money managers can outperform the broader indices by a superb amount (see the details here).

Unlike the largest US hedge funds that are convinced Dow will soar past 40,000 or the world’s most bearish hedge fund that’s more convinced than ever that a crash is coming, our long-short investment strategy doesn’t rely on bull or bear markets to deliver double digit returns. We only rely on the best performing hedge funds‘ buy/sell signals. We’re going to check out the recent hedge fund action encompassing Intuitive Surgical, Inc. (NASDAQ:ISRG).

At the end of the third quarter, a total of 41 of the hedge funds tracked by Insider Monkey were bullish on this stock, a change of 11% from the second quarter of 2019. Below, you can check out the change in hedge fund sentiment towards ISRG over the last 17 quarters. With hedge funds’ positions undergoing their usual ebb and flow, there exists an “upper tier” of key hedge fund managers who were boosting their holdings substantially (or already accumulated large positions). 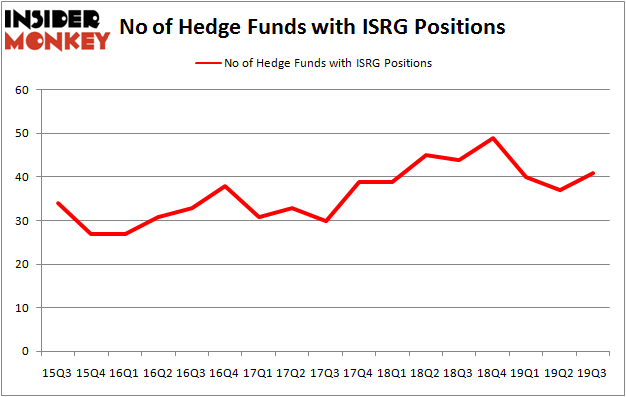 Among these funds, Coatue Management held the most valuable stake in Intuitive Surgical, Inc. (NASDAQ:ISRG), which was worth $287.9 million at the end of the third quarter. On the second spot was Healthcor Management which amassed $127 million worth of shares. OrbiMed Advisors, Citadel Investment Group, and Adage Capital Management were also very fond of the stock, becoming one of the largest hedge fund holders of the company. In terms of the portfolio weights assigned to each position Healthcor Management allocated the biggest weight to Intuitive Surgical, Inc. (NASDAQ:ISRG), around 4.8% of its portfolio. Rock Springs Capital Management is also relatively very bullish on the stock, designating 3.28 percent of its 13F equity portfolio to ISRG.

As industrywide interest jumped, specific money managers were breaking ground themselves. Healthcor Management, managed by Arthur B Cohen and Joseph Healey, established the largest position in Intuitive Surgical, Inc. (NASDAQ:ISRG). Healthcor Management had $127 million invested in the company at the end of the quarter. Steve Cohen’s Point72 Asset Management also made a $85.7 million investment in the stock during the quarter. The following funds were also among the new ISRG investors: Stanley Druckenmiller’s Duquesne Capital, Benjamin A. Smith’s Laurion Capital Management, and Ray Dalio’s Bridgewater Associates.

Let’s now take a look at hedge fund activity in other stocks – not necessarily in the same industry as Intuitive Surgical, Inc. (NASDAQ:ISRG) but similarly valued. We will take a look at Anthem Inc (NYSE:ANTM), VMware, Inc. (NYSE:VMW), S&P Global Inc. (NYSE:SPGI), and Zoetis Inc (NYSE:ZTS). This group of stocks’ market values are closest to ISRG’s market value.

As you can see these stocks had an average of 52.25 hedge funds with bullish positions and the average amount invested in these stocks was $2715 million. That figure was $1401 million in ISRG’s case. S&P Global Inc. (NYSE:SPGI) is the most popular stock in this table. On the other hand VMware, Inc. (NYSE:VMW) is the least popular one with only 35 bullish hedge fund positions. Intuitive Surgical, Inc. (NASDAQ:ISRG) is not the least popular stock in this group but hedge fund interest is still below average. Our calculations showed that top 20 most popular stocks among hedge funds returned 37.4% in 2019 through the end of November and outperformed the S&P 500 ETF (SPY) by 9.9 percentage points. A small number of hedge funds were also right about betting on ISRG, though not to the same extent, as the stock returned 9.8% during the first two months of the fourth quarter and outperformed the market.