Most investors tend to think that hedge funds and other asset managers are worthless, as they cannot beat even simple index fund portfolios. In fact, most people expect hedge funds to compete with and outperform the bull market that we have witnessed in recent years. However, hedge funds are generally partially hedged and aim at delivering attractive risk-adjusted returns rather than following the ups and downs of equity markets hoping that they will outperform the broader market. Our research shows that certain hedge funds do have great stock picking skills (and we can identify these hedge funds in advance pretty accurately), so let’s take a glance at the smart money sentiment towards Huntington Bancshares Incorporated (NASDAQ:HBAN).

Huntington Bancshares Incorporated (NASDAQ:HBAN) was in 23 hedge funds’ portfolios at the end of June. HBAN has seen a decrease in support from the world’s most elite money managers lately. There were 28 hedge funds in our database with HBAN positions at the end of the previous quarter. Our calculations also showed that HBAN isn’t among the 30 most popular stocks among hedge funds (view the video below).

In the 21st century investor’s toolkit there are tons of signals investors employ to value stocks. A couple of the best signals are hedge fund and insider trading activity. We have shown that, historically, those who follow the top picks of the top money managers can beat the broader indices by a solid amount (see the details here).

What does smart money think about Huntington Bancshares Incorporated (NASDAQ:HBAN)?

At the end of the second quarter, a total of 23 of the hedge funds tracked by Insider Monkey were bullish on this stock, a change of -18% from the previous quarter. The graph below displays the number of hedge funds with bullish position in HBAN over the last 16 quarters. With the smart money’s sentiment swirling, there exists a select group of key hedge fund managers who were upping their stakes considerably (or already accumulated large positions). 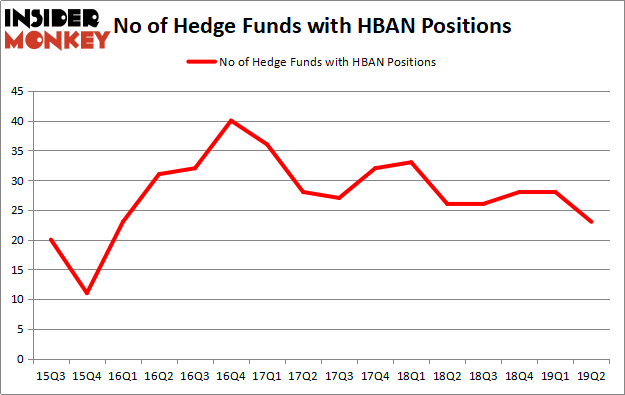 More specifically, White Elm Capital was the largest shareholder of Huntington Bancshares Incorporated (NASDAQ:HBAN), with a stake worth $15.9 million reported as of the end of March. Trailing White Elm Capital was Balyasny Asset Management, which amassed a stake valued at $15.7 million. Citadel Investment Group, Two Sigma Advisors, and GAMCO Investors were also very fond of the stock, giving the stock large weights in their portfolios.

Judging by the fact that Huntington Bancshares Incorporated (NASDAQ:HBAN) has faced a decline in interest from hedge fund managers, logic holds that there is a sect of hedge funds that elected to cut their full holdings in the second quarter. At the top of the heap, Ross Margolies’s Stelliam Investment Management cut the largest investment of all the hedgies watched by Insider Monkey, valued at an estimated $12.3 million in stock. Phill Gross and Robert Atchinson’s fund, Adage Capital Management, also dropped its stock, about $3.6 million worth. These transactions are important to note, as total hedge fund interest was cut by 5 funds in the second quarter.

As you can see these stocks had an average of 34.75 hedge funds with bullish positions and the average amount invested in these stocks was $1385 million. That figure was $67 million in HBAN’s case. WellCare Health Plans, Inc. (NYSE:WCG) is the most popular stock in this table. On the other hand Western Digital Corporation (NASDAQ:WDC) is the least popular one with only 25 bullish hedge fund positions. Compared to these stocks Huntington Bancshares Incorporated (NASDAQ:HBAN) is even less popular than WDC. Our calculations showed that top 20 most popular stocks among hedge funds returned 24.4% in 2019 through September 30th and outperformed the S&P 500 ETF (SPY) by 4 percentage points. A small number of hedge funds were also right about betting on HBAN, though not to the same extent, as the stock returned 4.3% during the third quarter and outperformed the market as well.