Many investors, including Paul Tudor Jones or Stan Druckenmiller, have been saying before the Q4 market crash that the stock market is overvalued due to a low interest rate environment that leads to companies swapping their equity for debt and focusing mostly on short-term performance such as beating the quarterly earnings estimates. In the fourth quarter, many investors lost money due to unpredictable events such as the sudden increase in long-term interest rates and unintended consequences of the trade war with China. Nevertheless, many of the stocks that tanked in the fourth quarter still sport strong fundamentals and their decline was more related to the general market sentiment rather than their individual performance and hedge funds kept their bullish stance. In this article we will find out how hedge fund sentiment to Host Hotels and Resorts Inc (NYSE:HST) changed recently.

Host Hotels and Resorts Inc (NYSE:HST) was in 22 hedge funds’ portfolios at the end of the fourth quarter of 2018. HST has experienced an increase in hedge fund sentiment recently. There were 21 hedge funds in our database with HST holdings at the end of the previous quarter. Our calculations also showed that HST isn’t among the 30 most popular stocks among hedge funds.

What does the smart money think about Host Hotels and Resorts Inc (NYSE:HST)? 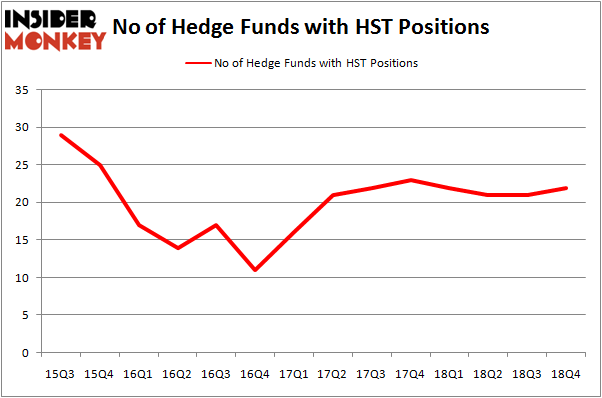 The largest stake in Host Hotels and Resorts Inc (NYSE:HST) was held by AEW Capital Management, which reported holding $87.7 million worth of stock at the end of September. It was followed by Millennium Management with a $75.5 million position. Other investors bullish on the company included D E Shaw, Two Sigma Advisors, and GLG Partners.

With a general bullishness amongst the heavyweights, key hedge funds have been driving this bullishness. Element Capital Management, managed by Jeffrey Talpins, initiated the biggest position in Host Hotels and Resorts Inc (NYSE:HST). Element Capital Management had $1.9 million invested in the company at the end of the quarter. Bruce Kovner’s Caxton Associates LP also initiated a $0.5 million position during the quarter. The other funds with new positions in the stock are Ben Levine, Andrew Manuel and Stefan Renold’s LMR Partners and Claes Fornell’s CSat Investment Advisory.

As you can see these stocks had an average of 34 hedge funds with bullish positions and the average amount invested in these stocks was $1360 million. That figure was $329 million in HST’s case. PG&E Corporation (NYSE:PCG) is the most popular stock in this table. On the other hand CoStar Group Inc (NASDAQ:CSGP) is the least popular one with only 23 bullish hedge fund positions. Compared to these stocks Host Hotels and Resorts Inc (NYSE:HST) is even less popular than CSGP. Considering that hedge funds aren’t fond of this stock in relation to other companies analyzed in this article, it may be a good idea to analyze it in detail and understand why the smart money isn’t behind this stock. This isn’t necessarily bad news. Although it is possible that hedge funds may think the stock is overpriced and view the stock as a short candidate, they may not be very familiar with the bullish thesis. Our calculations showed that top 15 most popular stocks among hedge funds returned 19.7% through March 15th and outperformed the S&P 500 ETF (SPY) by 6.6 percentage points. Hedge funds were also right about betting on HST, though not to the same extent, as the stock returned 14.9% and outperformed the market as well.