Is HMS Holdings Corp. (NASDAQ:HMSY) ready to rally soon? The best stock pickers are getting more bullish. The number of bullish hedge fund bets increased by 6 recently. Our calculations also showed that HMSY isn’t among the 30 most popular stocks among hedge funds. HMSY was in 22 hedge funds’ portfolios at the end of December. There were 16 hedge funds in our database with HMSY positions at the end of the previous quarter.

At the end of the fourth quarter, a total of 22 of the hedge funds tracked by Insider Monkey were long this stock, a change of 38% from the previous quarter. On the other hand, there were a total of 11 hedge funds with a bullish position in HMSY a year ago. With the smart money’s capital changing hands, there exists an “upper tier” of noteworthy hedge fund managers who were increasing their holdings meaningfully (or already accumulated large positions). 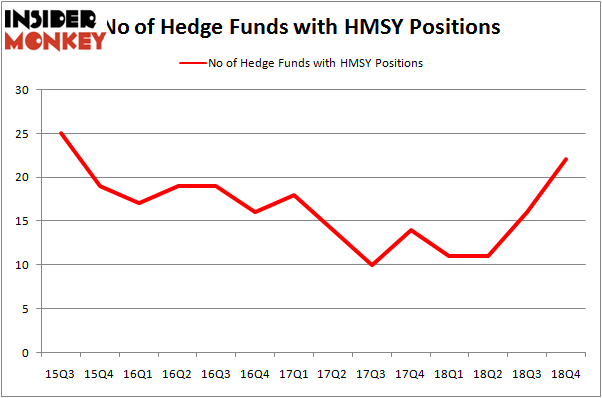 Among these funds, D E Shaw held the most valuable stake in HMS Holdings Corp. (NASDAQ:HMSY), which was worth $27.4 million at the end of the third quarter. On the second spot was Renaissance Technologies which amassed $25.2 million worth of shares. Moreover, Citadel Investment Group, Arrowstreet Capital, and Winton Capital Management were also bullish on HMS Holdings Corp. (NASDAQ:HMSY), allocating a large percentage of their portfolios to this stock.