Does Merchants Bancorp (NASDAQ:MBIN) represent a good buying opportunity at the moment? Let’s briefly check the hedge fund interest towards the company. Hedge fund firms constantly search out bright intellectuals and highly-experienced employees and throw away millions of dollars on satellite photos and other research activities, so it is no wonder why they tend to generate millions in profits each year. It is also true that some hedge fund players fail inconceivably on some occasions, but net net their stock picks have been generating superior risk-adjusted returns on average over the years.

Merchants Bancorp (NASDAQ:MBIN) investors should pay attention to a decrease in support from the world’s most elite money managers lately. MBIN was in 4 hedge funds’ portfolios at the end of the fourth quarter of 2018. There were 8 hedge funds in our database with MBIN holdings at the end of the previous quarter. Our calculations also showed that MBIN isn’t among the 30 most popular stocks among hedge funds.

At the moment there are a lot of indicators shareholders put to use to evaluate stocks. Two of the less known indicators are hedge fund and insider trading interest. Our researchers have shown that, historically, those who follow the best picks of the top hedge fund managers can beat the market by a superb margin (see the details here).

We’re going to take a peek at the latest hedge fund action regarding Merchants Bancorp (NASDAQ:MBIN).

What does the smart money think about Merchants Bancorp (NASDAQ:MBIN)? 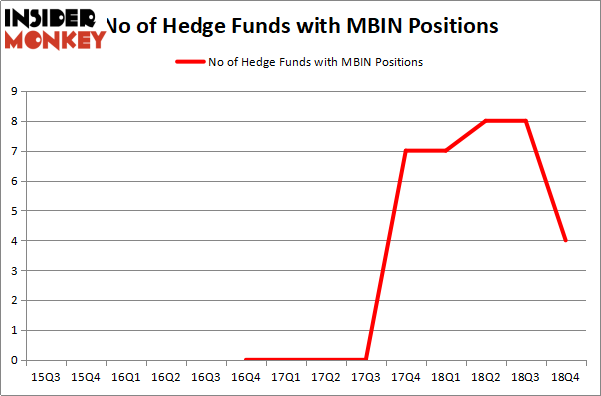 More specifically, Basswood Capital was the largest shareholder of Merchants Bancorp (NASDAQ:MBIN), with a stake worth $4.3 million reported as of the end of December. Trailing Basswood Capital was D E Shaw, which amassed a stake valued at $1 million. Two Sigma Advisors and Royce & Associates were also very fond of the stock, giving the stock large weights in their portfolios.

Because Merchants Bancorp (NASDAQ:MBIN) has experienced declining sentiment from hedge fund managers, it’s easy to see that there lies a certain “tier” of hedge funds who sold off their positions entirely in the third quarter. Intriguingly, Paul Magidson, Jonathan Cohen. And Ostrom Enders’s Castine Capital Management said goodbye to the largest investment of the “upper crust” of funds watched by Insider Monkey, valued at an estimated $4.5 million in stock. Israel Englander’s fund, Millennium Management, also dumped its stock, about $0.8 million worth. These moves are intriguing to say the least, as total hedge fund interest fell by 4 funds in the third quarter.

As you can see these stocks had an average of 14 hedge funds with bullish positions and the average amount invested in these stocks was $110 million. That figure was $6 million in MBIN’s case. Karyopharm Therapeutics Inc (NASDAQ:KPTI) is the most popular stock in this table. On the other hand First Foundation Inc (NASDAQ:FFWM) is the least popular one with only 11 bullish hedge fund positions. Compared to these stocks Merchants Bancorp (NASDAQ:MBIN) is even less popular than FFWM. Our calculations showed that top 15 most popular stocks) among hedge funds returned 24.2% through April 22nd and outperformed the S&P 500 ETF (SPY) by more than 7 percentage points. A small number of hedge funds were also right about betting on MBIN, though not to the same extent, as the stock returned 19.7% and outperformed the market as well.