We can judge whether HB Fuller Co (NYSE:FUL) is a good investment right now by following the lead of some of the best investors in the world and piggybacking their ideas. There’s no better way to get these firms’ immense resources and analytical capabilities working for us than to follow their lead into their best ideas. While not all of these picks will be winners, our research shows that these picks historically outperformed the market when we factor in known risk factors.

HB Fuller Co (NYSE:FUL) has experienced an increase in hedge fund sentiment recently. FUL was in 14 hedge funds’ portfolios at the end of the fourth quarter of 2018. There were 8 hedge funds in our database with FUL positions at the end of the previous quarter. Our calculations also showed that FUL isn’t among the 30 most popular stocks among hedge funds.

What have hedge funds been doing with HB Fuller Co (NYSE:FUL)? 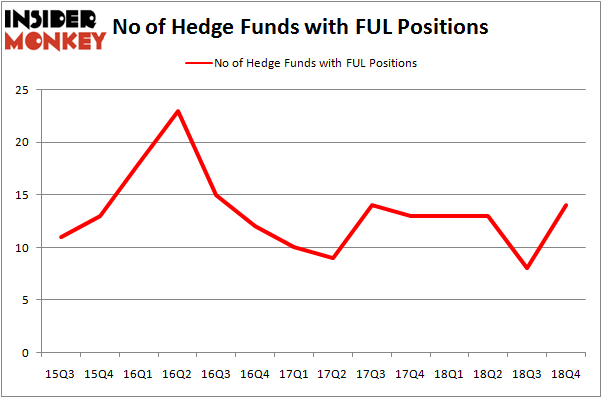 According to Insider Monkey’s hedge fund database, Claus Moller’s P2 Capital Partners has the biggest position in HB Fuller Co (NYSE:FUL), worth close to $40 million, accounting for 4% of its total 13F portfolio. The second most bullish fund manager is Mario Gabelli of GAMCO Investors, with a $25.2 million position; 0.2% of its 13F portfolio is allocated to the stock. Other hedge funds and institutional investors that are bullish encompass Phill Gross and Robert Atchinson’s Adage Capital Management, Israel Englander’s Millennium Management and Ed Bosek’s BeaconLight Capital.

As you can see these stocks had an average of 17 hedge funds with bullish positions and the average amount invested in these stocks was $183 million. That figure was $118 million in FUL’s case. Global Blood Therapeutics Inc (NASDAQ:GBT) is the most popular stock in this table. On the other hand Q2 Holdings Inc (NYSE:QTWO) is the least popular one with only 12 bullish hedge fund positions. HB Fuller Co (NYSE:FUL) is not the least popular stock in this group but hedge fund interest is still below average. Our calculations showed that top 15 most popular stocks) among hedge funds returned 24.2% through April 22nd and outperformed the S&P 500 ETF (SPY) by more than 7 percentage points. A small number of hedge funds were also right about betting on FUL, though not to the same extent, as the stock returned 17.5% and outperformed the market as well.