Is GMS Inc. (NYSE:GMS) a healthy stock for your portfolio? Hedge funds are getting less optimistic. The number of long hedge fund positions were trimmed by 4 lately. Our calculations also showed that GMS isn’t among the 30 most popular stocks among hedge funds.

In the eyes of most shareholders, hedge funds are seen as slow, outdated financial vehicles of years past. While there are over 8000 funds with their doors open at present, Our researchers hone in on the masters of this group, approximately 750 funds. These investment experts manage bulk of the hedge fund industry’s total capital, and by keeping track of their matchless equity investments, Insider Monkey has revealed numerous investment strategies that have historically outperformed the S&P 500 index. Insider Monkey’s flagship hedge fund strategy exceeded the S&P 500 index by nearly 5 percentage points annually since its inception in May 2014 through early November 2018. We were able to generate large returns even by identifying short candidates. Our portfolio of short stocks lost 27.5% since February 2017 (through March 12th) even though the market was up nearly 25% during the same period. We just shared a list of 6 short targets in our latest quarterly update and they are already down an average of 6% in less than a month.

How have hedgies been trading GMS Inc. (NYSE:GMS)?

At the end of the fourth quarter, a total of 20 of the hedge funds tracked by Insider Monkey were long this stock, a change of -17% from the previous quarter. On the other hand, there were a total of 21 hedge funds with a bullish position in GMS a year ago. With hedgies’ capital changing hands, there exists a select group of noteworthy hedge fund managers who were adding to their stakes considerably (or already accumulated large positions). 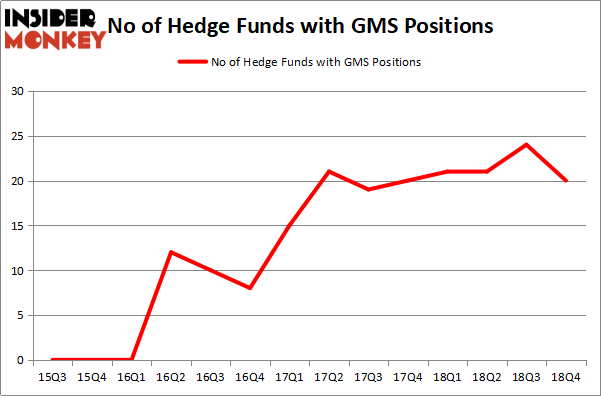 Since GMS Inc. (NYSE:GMS) has witnessed falling interest from the entirety of the hedge funds we track, logic holds that there exists a select few hedgies that slashed their positions entirely in the third quarter. It’s worth mentioning that Noam Gottesman’s GLG Partners dumped the biggest stake of the 700 funds monitored by Insider Monkey, comprising close to $7.5 million in stock, and Jerome L. Simon’s Lonestar Capital Management was right behind this move, as the fund dumped about $5.7 million worth. These transactions are intriguing to say the least, as total hedge fund interest dropped by 4 funds in the third quarter.