Is Gladstone Commercial Corporation (NASDAQ:GOOD) worth your attention right now? Prominent investors are taking an optimistic view. The number of long hedge fund bets moved up by 1 lately. Our calculations also showed that GOOD isn’t among the 30 most popular stocks among hedge funds. GOOD was in 7 hedge funds’ portfolios at the end of the fourth quarter of 2018. There were 6 hedge funds in our database with GOOD positions at the end of the previous quarter.

How have hedgies been trading Gladstone Commercial Corporation (NASDAQ:GOOD)?

At Q4’s end, a total of 7 of the hedge funds tracked by Insider Monkey were long this stock, a change of 17% from one quarter earlier. By comparison, 7 hedge funds held shares or bullish call options in GOOD a year ago. With the smart money’s positions undergoing their usual ebb and flow, there exists a few notable hedge fund managers who were boosting their holdings considerably (or already accumulated large positions). 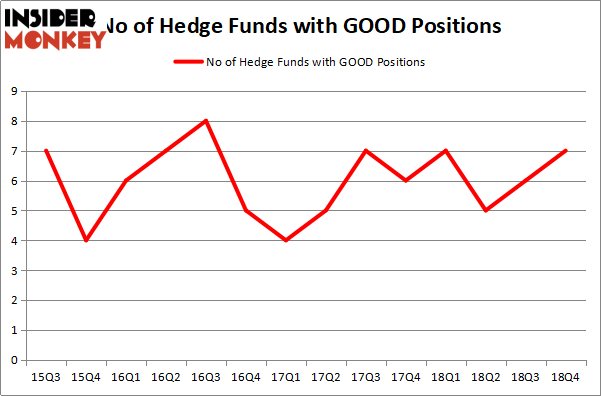 According to publicly available hedge fund and institutional investor holdings data compiled by Insider Monkey, Renaissance Technologies, managed by Jim Simons, holds the largest position in Gladstone Commercial Corporation (NASDAQ:GOOD). Renaissance Technologies has a $43.7 million position in the stock, comprising less than 0.1%% of its 13F portfolio. On Renaissance Technologies’s heels is Israel Englander of Millennium Management, with a $4.8 million position; the fund has less than 0.1%% of its 13F portfolio invested in the stock. Some other professional money managers that hold long positions encompass John Overdeck and David Siegel’s Two Sigma Advisors, D. E. Shaw’s D E Shaw and Paul Marshall and Ian Wace’s Marshall Wace LLP.

Now, specific money managers were breaking ground themselves. Marshall Wace LLP, managed by Paul Marshall and Ian Wace, created the most valuable position in Gladstone Commercial Corporation (NASDAQ:GOOD). Marshall Wace LLP had $0.5 million invested in the company at the end of the quarter. Michael Platt and William Reeves’s BlueCrest Capital Mgmt. also made a $0.3 million investment in the stock during the quarter.

As you can see these stocks had an average of 14.75 hedge funds with bullish positions and the average amount invested in these stocks was $71 million. That figure was $52 million in GOOD’s case. Superior Energy Services, Inc. (NYSE:SPN) is the most popular stock in this table. On the other hand Veritex Holdings Inc (NASDAQ:VBTX) is the least popular one with only 8 bullish hedge fund positions. Compared to these stocks Gladstone Commercial Corporation (NASDAQ:GOOD) is even less popular than VBTX. Our calculations showed that top 15 most popular stocks) among hedge funds returned 24.2% through April 22nd and outperformed the S&P 500 ETF (SPY) by more than 7 percentage points. A small number of hedge funds were also right about betting on GOOD, though not to the same extent, as the stock returned 17.9% and outperformed the market as well.