How do we determine whether Genesee & Wyoming Inc (NYSE:GWR) makes for a good investment at the moment? We analyze the sentiment of a select group of the very best investors in the world, who spend immense amounts of time and resources studying companies. They may not always be right (no one is), but data shows that their consensus long positions have historically outperformed the market when we adjust for known risk factors.

Is Genesee & Wyoming Inc (NYSE:GWR) a worthy investment today? Prominent investors are buying. The number of bullish hedge fund positions inched up by 7 lately. Our calculations also showed that GWR isn’t among the 30 most popular stocks among hedge funds. 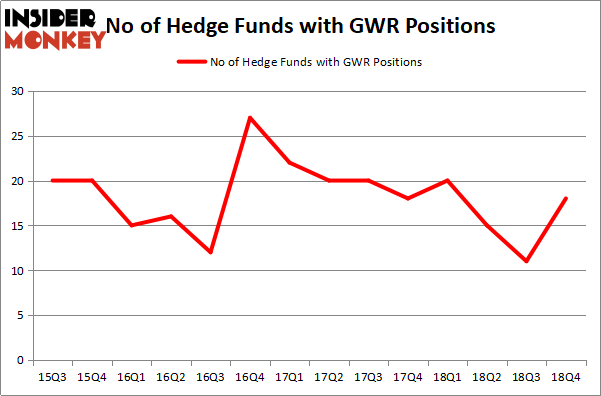 The largest stake in Genesee & Wyoming Inc (NYSE:GWR) was held by Blue Harbour Group, which reported holding $118.7 million worth of stock at the end of September. It was followed by Cardinal Capital with a $111 million position. Other investors bullish on the company included Goodnow Investment Group, Winton Capital Management, and Citadel Investment Group.

Now, some big names were leading the bulls’ herd. Citadel Investment Group, managed by Ken Griffin, assembled the largest position in Genesee & Wyoming Inc (NYSE:GWR). Citadel Investment Group had $9.8 million invested in the company at the end of the quarter. Joel Greenblatt’s Gotham Asset Management also made a $9.7 million investment in the stock during the quarter. The other funds with brand new GWR positions are Paul Singer’s Elliott Management, Dmitry Balyasny’s Balyasny Asset Management, and Israel Englander’s Millennium Management.

As you can see these stocks had an average of 23.5 hedge funds with bullish positions and the average amount invested in these stocks was $615 million. That figure was $322 million in GWR’s case. W.R. Grace & Co. (NYSE:GRA) is the most popular stock in this table. On the other hand Prosperity Bancshares, Inc. (NYSE:PB) is the least popular one with only 9 bullish hedge fund positions. Genesee & Wyoming Inc (NYSE:GWR) is not the least popular stock in this group but hedge fund interest is still below average. Our calculations showed that top 15 most popular stocks) among hedge funds returned 24.2% through April 22nd and outperformed the S&P 500 ETF (SPY) by more than 7 percentage points. A small number of hedge funds were also right about betting on GWR, though not to the same extent, as the stock returned 17% and outperformed the market as well.