Concerns over rising interest rates and expected further rate increases have hit several stocks hard during the fourth quarter. NASDAQ and Russell 2000 indices were already in correction territory. More importantly, Russell 2000 ETF (IWM) underperformed the larger S&P 500 ETF (SPY) by nearly 7 percentage points in the fourth quarter. Hedge funds and institutional investors tracked by Insider Monkey usually invest a disproportionate amount of their portfolios in smaller cap stocks. We have been receiving indications that hedge funds were paring back their overall exposure and this is one of the factors behind the recent movements in major indices. In this article, we will take a closer look at hedge fund sentiment towards ESCO Technologies Inc. (NYSE:ESE).

Is ESCO Technologies Inc. (NYSE:ESE) a worthy stock to buy now? The smart money is becoming less confident. The number of long hedge fund bets were cut by 1 lately. Our calculations also showed that ESE isn’t among the 30 most popular stocks among hedge funds.

In today’s marketplace there are several gauges stock market investors use to evaluate publicly traded companies. A duo of the less utilized gauges are hedge fund and insider trading signals. Our researchers have shown that, historically, those who follow the best picks of the best investment managers can outclass the broader indices by a very impressive amount (see the details here).

At the end of the fourth quarter, a total of 5 of the hedge funds tracked by Insider Monkey held long positions in this stock, a change of -17% from the previous quarter. By comparison, 6 hedge funds held shares or bullish call options in ESE a year ago. With hedge funds’ capital changing hands, there exists an “upper tier” of key hedge fund managers who were adding to their holdings substantially (or already accumulated large positions). 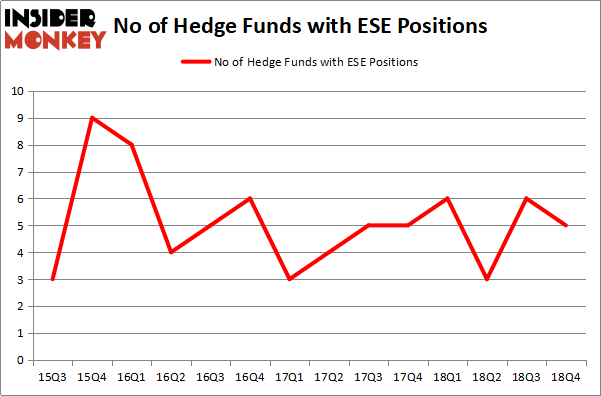 The largest stake in ESCO Technologies Inc. (NYSE:ESE) was held by Winton Capital Management, which reported holding $6 million worth of stock at the end of December. It was followed by Gotham Asset Management with a $0.5 million position. Other investors bullish on the company included Millennium Management, D E Shaw, and Blue Mountain Capital.

Since ESCO Technologies Inc. (NYSE:ESE) has faced declining sentiment from hedge fund managers, logic holds that there lies a certain “tier” of funds who were dropping their full holdings by the end of the third quarter. Interestingly, Paul Marshall and Ian Wace’s Marshall Wace LLP said goodbye to the largest investment of the 700 funds tracked by Insider Monkey, totaling an estimated $1.6 million in stock. Ken Griffin’s fund, Citadel Investment Group, also dumped its stock, about $0.6 million worth. These transactions are intriguing to say the least, as total hedge fund interest fell by 1 funds by the end of the third quarter.

As you can see these stocks had an average of 19 hedge funds with bullish positions and the average amount invested in these stocks was $283 million. That figure was $7 million in ESE’s case. BGC Partners, Inc. (NASDAQ:BGCP) is the most popular stock in this table. On the other hand First Merchants Corporation (NASDAQ:FRME) is the least popular one with only 13 bullish hedge fund positions. Compared to these stocks ESCO Technologies Inc. (NYSE:ESE) is even less popular than FRME. Hedge funds dodged a bullet by taking a bearish stance towards ESE. Our calculations showed that the top 15 most popular hedge fund stocks returned 24.2% through April 22nd and outperformed the S&P 500 ETF (SPY) by more than 7 percentage points. Unfortunately ESE wasn’t nearly as popular as these 15 stock (hedge fund sentiment was very bearish); ESE investors were disappointed as the stock returned 10.1% and underperformed the market. If you are interested in investing in large cap stocks with huge upside potential, you should check out the top 15 most popular stocks) among hedge funds as 13 of these stocks already outperformed the market this year.