Is Emergent Biosolutions Inc (NYSE:EBS) a good place to invest some of your money right now? We can gain invaluable insight to help us answer that question by studying the investment trends of top investors, who employ world-class Ivy League graduates, who are given immense resources and industry contacts to put their financial expertise to work. The top picks of these firms have historically outperformed the market when we account for known risk factors, making them very valuable investment ideas.

Is Emergent Biosolutions Inc (NYSE:EBS) a buy here? Investors who are in the know are in a pessimistic mood. The number of bullish hedge fund bets shrunk by 5 recently. Our calculations also showed that ebs isn’t among the 30 most popular stocks among hedge funds. EBS was in 11 hedge funds’ portfolios at the end of the first quarter of 2019. There were 16 hedge funds in our database with EBS positions at the end of the previous quarter. 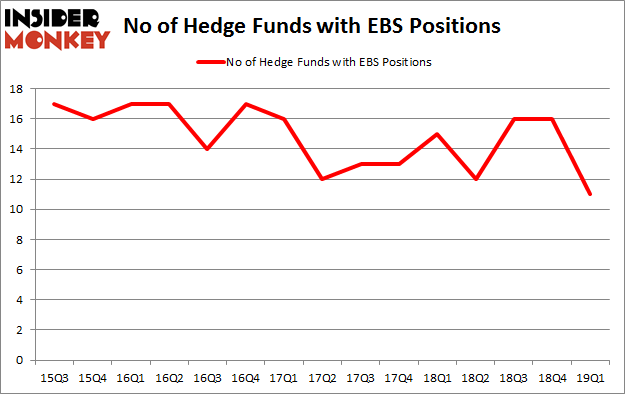 Of the funds tracked by Insider Monkey, Jim Simons’s Renaissance Technologies has the most valuable position in Emergent Biosolutions Inc (NYSE:EBS), worth close to $99.9 million, comprising 0.1% of its total 13F portfolio. Sitting at the No. 2 spot is Ken Fisher of Fisher Asset Management, with a $29.8 million position; the fund has less than 0.1%% of its 13F portfolio invested in the stock. Other members of the smart money that hold long positions consist of Noam Gottesman’s GLG Partners, Cliff Asness’s AQR Capital Management and Michael Castor’s Sio Capital.

Because Emergent Biosolutions Inc (NYSE:EBS) has experienced falling interest from the entirety of the hedge funds we track, we can see that there is a sect of hedgies who were dropping their full holdings by the end of the third quarter. At the top of the heap, Peter Rathjens, Bruce Clarke and John Campbell’s Arrowstreet Capital cut the biggest position of the “upper crust” of funds watched by Insider Monkey, worth close to $4.8 million in stock, and Joel Greenblatt’s Gotham Asset Management was right behind this move, as the fund sold off about $2.5 million worth. These transactions are interesting, as aggregate hedge fund interest dropped by 5 funds by the end of the third quarter.

As you can see these stocks had an average of 19.5 hedge funds with bullish positions and the average amount invested in these stocks was $536 million. That figure was $186 million in EBS’s case. Mirati Therapeutics, Inc. (NASDAQ:MRTX) is the most popular stock in this table. On the other hand Sunoco LP (NYSE:SUN) is the least popular one with only 7 bullish hedge fund positions. Emergent Biosolutions Inc (NYSE:EBS) is not the least popular stock in this group but hedge fund interest is still below average. This is a slightly negative signal and we’d rather spend our time researching stocks that hedge funds are piling on. Our calculations showed that top 20 most popular stocks among hedge funds returned 6.2% in Q2 through June 19th and outperformed the S&P 500 ETF (SPY) by nearly 3 percentage points. Unfortunately EBS wasn’t nearly as popular as these 20 stocks (hedge fund sentiment was quite bearish); EBS investors were disappointed as the stock returned -7.9% during the same time period and underperformed the market. If you are interested in investing in large cap stocks with huge upside potential, you should check out the top 20 most popular stocks among hedge funds as 13 of these stocks already outperformed the market so far in Q2.