Insider Monkey has processed numerous 13F filings of hedge funds and famous investors to create an extensive database of hedge fund holdings. The 13F filings show the hedge funds and investors’ positions as of the end of the third quarter. You can find write-ups about an individual hedge fund’s trades on numerous financial news websites. However, in this article we will take a look at their collective moves and analyze what the smart money thinks of Emergent Biosolutions Inc (NYSE:EBS) based on that data.

Is Emergent Biosolutions Inc (NYSE:EBS) ready to rally soon? Money managers are taking a bullish view. The number of long hedge fund bets rose by 4 recently. Our calculations also showed that EBS isn’t among the 30 most popular stocks among hedge funds. EBS was in 16 hedge funds’ portfolios at the end of the third quarter of 2018. There were 12 hedge funds in our database with EBS positions at the end of the previous quarter. 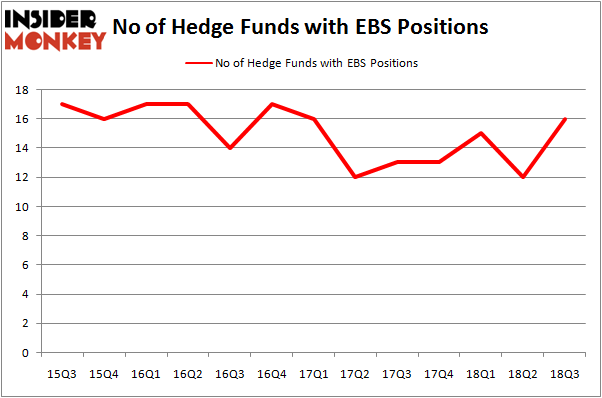 More specifically, Renaissance Technologies was the largest shareholder of Emergent Biosolutions Inc (NYSE:EBS), with a stake worth $123.2 million reported as of the end of September. Trailing Renaissance Technologies was GLG Partners, which amassed a stake valued at $38.2 million. Fisher Asset Management, AQR Capital Management, and D E Shaw were also very fond of the stock, giving the stock large weights in their portfolios.

Now, key money managers were leading the bulls’ herd. Sio Capital, managed by Michael Castor, assembled the largest position in Emergent Biosolutions Inc (NYSE:EBS). Sio Capital had $2.8 million invested in the company at the end of the quarter. Matthew Hulsizer’s PEAK6 Capital Management also made a $0.7 million investment in the stock during the quarter. The other funds with new positions in the stock are Matthew Hulsizer’s PEAK6 Capital Management, Roger Ibbotson’s Zebra Capital Management, and Gavin Saitowitz and Cisco J. del Valle’s Springbok Capital.

As you can see these stocks had an average of 14.25 hedge funds with bullish positions and the average amount invested in these stocks was $373 million. That figure was $219 million in EBS’s case. Madrigal Pharmaceuticals, Inc. (NASDAQ:MDGL) is the most popular stock in this table. On the other hand Guangshen Railway Co. Ltd (NYSE:GSH) is the least popular one with only 1 bullish hedge fund positions. Emergent Biosolutions Inc (NYSE:EBS) is not the most popular stock in this group but hedge fund interest is still above average. This is a slightly positive signal but we’d rather spend our time researching stocks that hedge funds are piling on. In this regard MDGL might be a better candidate to consider a long position.

Hedge Funds Are Dumping Interface, Inc. (TILE)
Monthly Newsletter Strategy
Download a free copy of our newsletter and see the details inside!
Hedge Fund Resource Center
Related News
Hedge Funds Are Dumping Emergent Biosolutions Inc (EBS) Ophthotech Corp (OPHT), First Solar, Inc. (FSLR), and More: Analysts Had This to Say About Some of The Week’s Top Movers Here’s Why These Five Stocks Are on the Move Today Two Under The Radar Biotech Decisions To Watch Next Month Here’s Why These Five Stocks Are on the Move Today Here’s Why United Continental, Cirrus Logic, Viacom and Two Other Stocks are Moving Today Emergent Biosolutions Inc (EBS): How Hedge Funds Are Trading This Biotech Stock 10 Easiest Winter Olympic Sports to Qualify for 11 Countries With The Worst Modern Music In The World The Top 5 Robo Advisor Apps of 2018
Billionaire Hedge Funds