Is Ducommun Incorporated (NYSE:DCO) a good equity to bet on right now? We like to check what the smart money thinks first before doing extensive research. Although there have been several high profile failed hedge fund picks, the consensus picks among hedge fund investors have historically outperformed the market after adjusting for known risk attributes. It’s not surprising given that hedge funds have access to better information and more resources to find the winners in the stock market.

Ducommun Incorporated (NYSE:DCO) was in 10 hedge funds’ portfolios at the end of the fourth quarter of 2018. DCO has seen an increase in hedge fund sentiment lately. There were 8 hedge funds in our database with DCO holdings at the end of the previous quarter. Our calculations also showed that DCO isn’t among the 30 most popular stocks among hedge funds.

We’re going to take a look at the fresh hedge fund action regarding Ducommun Incorporated (NYSE:DCO).

At Q4’s end, a total of 10 of the hedge funds tracked by Insider Monkey were bullish on this stock, a change of 25% from the previous quarter. By comparison, 7 hedge funds held shares or bullish call options in DCO a year ago. With hedge funds’ positions undergoing their usual ebb and flow, there exists an “upper tier” of noteworthy hedge fund managers who were increasing their holdings meaningfully (or already accumulated large positions). 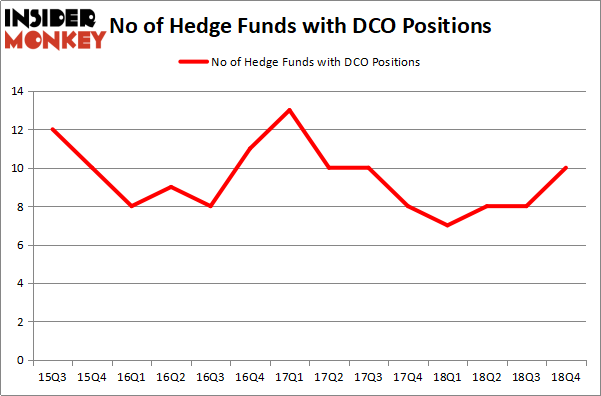 The largest stake in Ducommun Incorporated (NYSE:DCO) was held by Renaissance Technologies, which reported holding $21.6 million worth of stock at the end of December. It was followed by Royce & Associates with a $8.7 million position. Other investors bullish on the company included GAMCO Investors, AlphaOne Capital Partners, and AQR Capital Management.

As one would reasonably expect, some big names have been driving this bullishness. AlphaOne Capital Partners, managed by Paul Hondros, created the biggest position in Ducommun Incorporated (NYSE:DCO). AlphaOne Capital Partners had $2.8 million invested in the company at the end of the quarter. Matthew Hulsizer’s PEAK6 Capital Management also made a $0.4 million investment in the stock during the quarter. The only other fund with a new position in the stock is Gavin Saitowitz and Cisco J. del Valle’s Springbok Capital.

As you can see these stocks had an average of 8.75 hedge funds with bullish positions and the average amount invested in these stocks was $65 million. That figure was $45 million in DCO’s case. Prothena Corporation plc (NASDAQ:PRTA) is the most popular stock in this table. On the other hand Evelo Biosciences, Inc. (NASDAQ:EVLO) is the least popular one with only 3 bullish hedge fund positions. Ducommun Incorporated (NYSE:DCO) is not the most popular stock in this group but hedge fund interest is still above average. This is a slightly positive signal but we’d rather spend our time researching stocks that hedge funds are piling on. Our calculations showed that top 15 most popular stocks) among hedge funds returned 24.2% through April 22nd and outperformed the S&P 500 ETF (SPY) by more than 7 percentage points. Unfortunately DCO wasn’t nearly as popular as these 15 stock and hedge funds that were betting on DCO were disappointed as the stock returned 7.7% and underperformed the market. If you are interested in investing in large cap stocks with huge upside potential, you should check out the top 15 most popular stocks) among hedge funds as 13 of these stocks already outperformed the market this year.