Is Devon Energy Corp (NYSE:DVN) a good bet right now? We like to analyze hedge fund sentiment before doing days of in-depth research. We do so because hedge funds and other elite investors have numerous Ivy League graduates, expert network advisers, and supply chain tipsters working or consulting for them. There is not a shortage of news stories covering failed hedge fund investments and it is a fact that hedge funds’ picks don’t beat the market 100% of the time, but their consensus picks have historically done very well and have outperformed the market after adjusting for risk.

Is Devon Energy Corp (NYSE:DVN) worth your attention right now? Hedge funds are taking a pessimistic view. The number of bullish hedge fund bets went down by 2 lately. Our calculations also showed that dvn isn’t among the 30 most popular stocks among hedge funds. 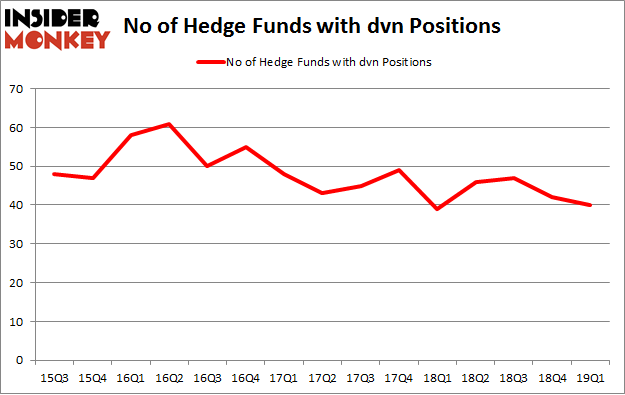 Among these funds, Elliott Management held the most valuable stake in Devon Energy Corp (NYSE:DVN), which was worth $553.1 million at the end of the first quarter. On the second spot was Diamond Hill Capital which amassed $269.1 million worth of shares. Moreover, Elliott Management, Millennium Management, and AQR Capital Management were also bullish on Devon Energy Corp (NYSE:DVN), allocating a large percentage of their portfolios to this stock.

Judging by the fact that Devon Energy Corp (NYSE:DVN) has experienced a decline in interest from the aggregate hedge fund industry, logic holds that there is a sect of funds that slashed their full holdings in the third quarter. Intriguingly, Steve Cohen’s Point72 Asset Management said goodbye to the largest position of the 700 funds watched by Insider Monkey, worth about $65.9 million in stock. Sara Nainzadeh’s fund, Centenus Global Management, also said goodbye to its stock, about $10.3 million worth. These bearish behaviors are interesting, as aggregate hedge fund interest dropped by 2 funds in the third quarter.

Here’s What Hedge Funds Think About JD.Com Inc (JD)
Monthly Newsletter Strategy
Download a free copy of our newsletter and see the details inside!
Hedge Fund Resource Center
Related News
Billionaire George Soros Sold These Stocks Chesapeake Energy, Hess, Devon Energy, and More: This Week in Energy Did Hedge Funds Drop The Ball On Devon Energy Corp (DVN) ? 4 Stocks “the World’s Most Feared Investor” Bought in Q3 (and 1 He Dumped) Here is What Hedge Funds Think About Devon Energy Corp (DVN) Hedge Funds Are Powering Up Their Portfolios With This Energy Stock 25 Stocks Billionaires Are Piling On 21 Best Tinder Bio Examples for Newly Single Moms 17 Best Excuses to Get Out of Work 25 Best Bumble Bios For Girls
Billionaire Hedge Funds