Insider Monkey finished processing more than 700 13F filings submitted by hedge funds and prominent investors. These filings show these funds’ portfolio positions as of December 31st, 2018. In this article we are going to take a look at smart money sentiment towards Cheniere Energy, Inc. (NYSE:LNG).

Is Cheniere Energy, Inc. (NYSE:LNG) worth your attention right now? Money managers are turning bullish. The number of bullish hedge fund bets improved by 4 in recent months. Our calculations also showed that LNG isn’t among the 30 most popular stocks among hedge funds. LNG was in 46 hedge funds’ portfolios at the end of the fourth quarter of 2018. There were 42 hedge funds in our database with LNG positions at the end of the previous quarter.

According to most investors, hedge funds are perceived as worthless, old financial vehicles of the past. While there are over 8000 funds in operation at present, Our researchers look at the bigwigs of this group, approximately 750 funds. Most estimates calculate that this group of people command most of the hedge fund industry’s total asset base, and by watching their highest performing picks, Insider Monkey has spotted a number of investment strategies that have historically surpassed the market. Insider Monkey’s flagship hedge fund strategy beat the S&P 500 index by nearly 5 percentage points per year since its inception in May 2014 through early November 2018. We were able to generate large returns even by identifying short candidates. Our portfolio of short stocks lost 27.5% since February 2017 (through March 12th) even though the market was up nearly 25% during the same period. We just shared a list of 6 short targets in our latest quarterly update and they are already down an average of 6% in less than a month.

How have hedgies been trading Cheniere Energy, Inc. (NYSE:LNG)?

Heading into the first quarter of 2019, a total of 46 of the hedge funds tracked by Insider Monkey were bullish on this stock, a change of 10% from one quarter earlier. The graph below displays the number of hedge funds with bullish position in LNG over the last 14 quarters. With hedge funds’ capital changing hands, there exists an “upper tier” of key hedge fund managers who were boosting their holdings substantially (or already accumulated large positions). 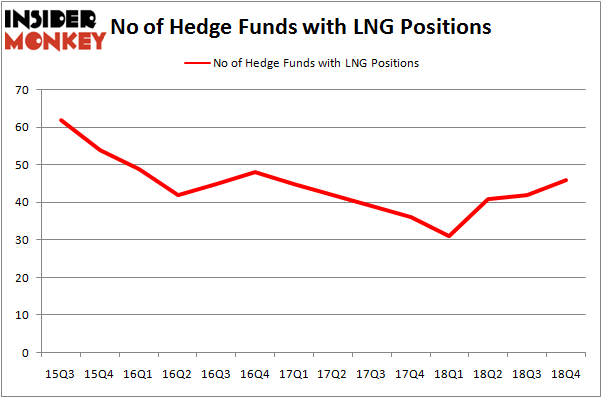 As aggregate interest increased, some big names were leading the bulls’ herd. Deep Basin Capital, managed by Matt Smith, assembled the most outsized position in Cheniere Energy, Inc. (NYSE:LNG). Deep Basin Capital had $46.5 million invested in the company at the end of the quarter. Farhad Nanji and Michael DeMichele’s MFN Partners also made a $44.4 million investment in the stock during the quarter. The other funds with brand new LNG positions are Steve Pattyn’s Yaupon Capital, Steve Cohen’s Point72 Asset Management, and D. E. Shaw’s D E Shaw.

As you can see these stocks had an average of 27.75 hedge funds with bullish positions and the average amount invested in these stocks was $953 million. That figure was $5003 million in LNG’s case. BioMarin Pharmaceutical Inc. (NASDAQ:BMRN) is the most popular stock in this table. On the other hand Magna International Inc. (NYSE:MGA) is the least popular one with only 22 bullish hedge fund positions. Compared to these stocks Cheniere Energy, Inc. (NYSE:LNG) is more popular among hedge funds. Considering that hedge funds are fond of this stock in relation to its market cap peers, it may be a good idea to analyze it in detail and potentially include it in your portfolio. Our calculations showed that top 15 most popular stocks among hedge funds returned 19.7% through March 15th and outperformed the S&P 500 ETF (SPY) by 6.6 percentage points. Hedge funds were also right about betting on LNG, though not to the same extent, as the stock returned 16.4%, outperforming the market.